Why Do I Have to Remove my Filled in Place Tank? 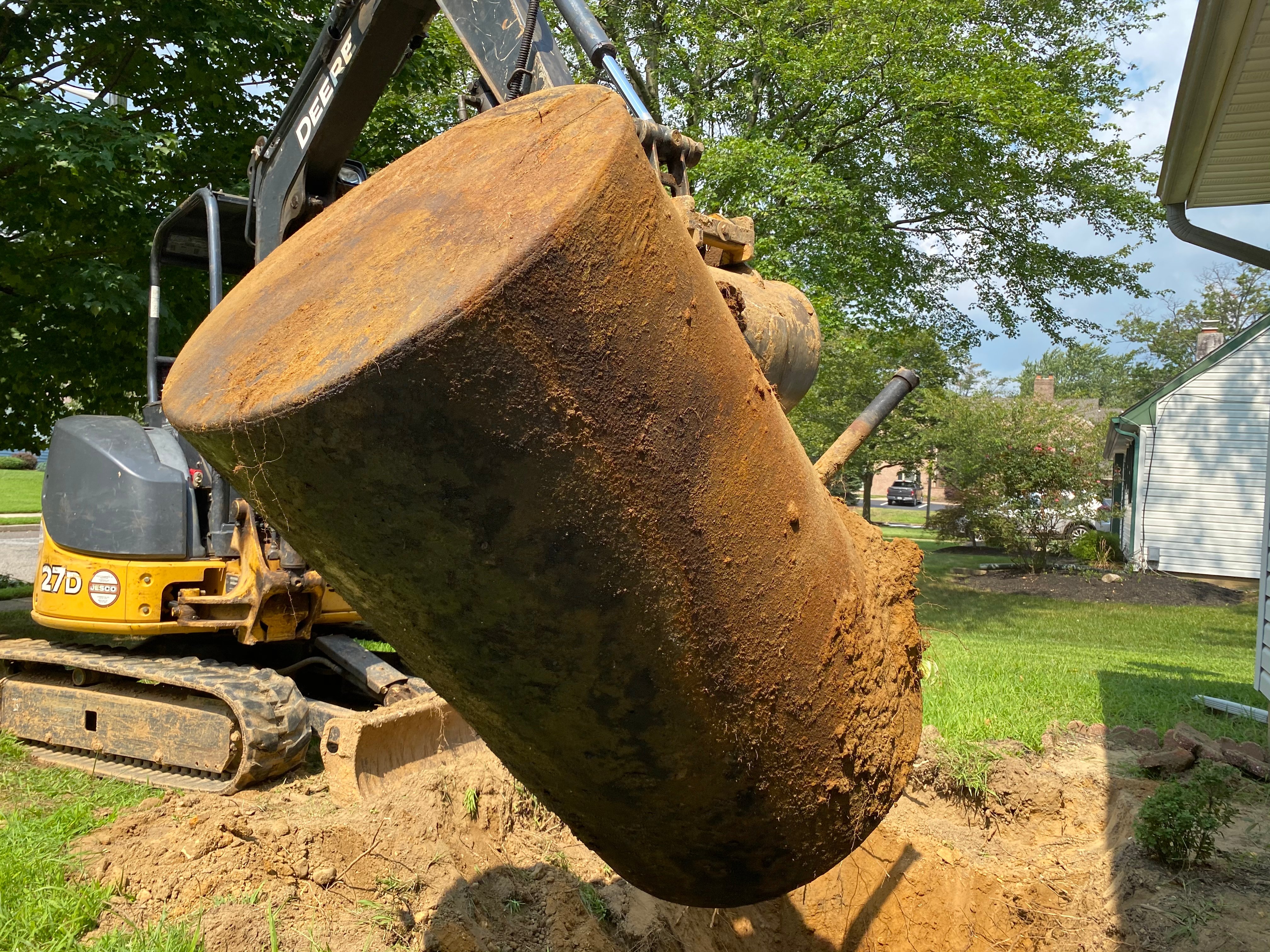 For a variety of reasons many property owners decided to fill their oil tanks in place in lieu of removing the tanks.   The oil tanks typically were removed from service during an oil to gas conversion, making the tank obsolete.  If the HVAC company offered white glove service, which was popular in the 1980's to late 90's, the tanks were filled in place with sand.  Some tanks were filled with foam, as the code for tank closure in place requires the tank to be filled with an inert material including sand, stone, concrete or foam.

This photos shows a tank that was filled with foam, we removed the tank and the foam.  The black staining on the foam?  Well that is oil that was not cleaned from the tank prior to foaming.   So the tank had residual oil after foam filling.   Tanks are supposed to be devoid of all liquid when you either remove them or fill them in place.  A tank with no oil cannot leak in the future. 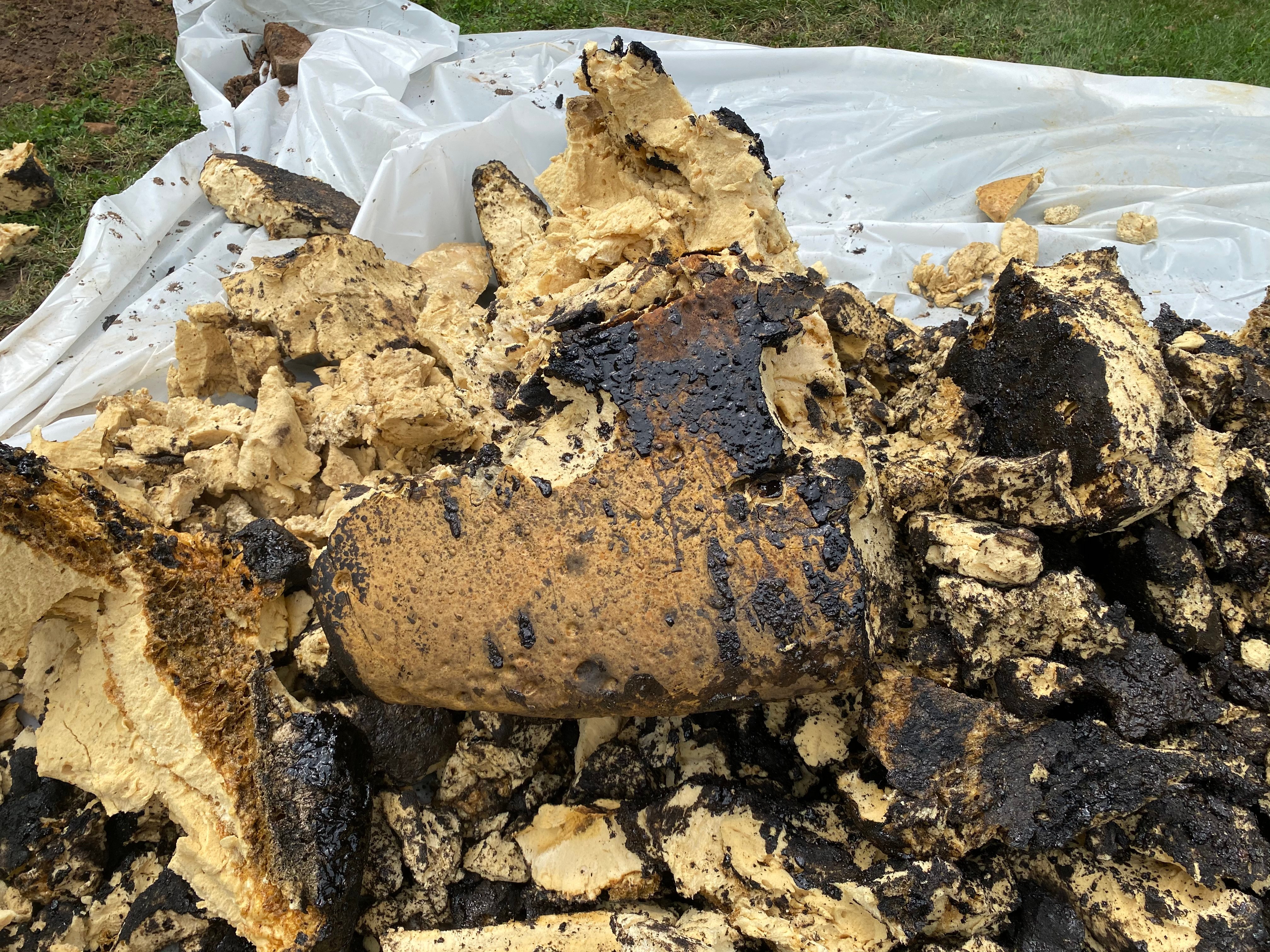 If you do not have documentation stating the tank was cleaned of all liquid   (Typically a company will reference American Petroleum Institute or API 2015:2018  Requirements for Safe Entry & Cleaning of Petroleum Storage Tanks.).  This API standard requires tank entry to clean the tank, 99% of documents we review of tanks previously closed in place do not reference API standards were followed, which again leaks a data gap.  ever clean a tank?   You crawl around in a Tyvek suit and respirator in the dark with a full face respirator cleaning oil from the tank.  many peopel took a pass on that and left oil in the tank.  Technically you also have to be trained to enter a tank safely as it can have a low atmosphere of oxygen.

The primary reason you must remove a tank that was filled in-place is because you lack soil testing, an assurance that all oil was removed as stated above and an associated report stating that tank did not leak.  Unfortunately is is just so common that these tanks never had soil testing performed, so the whole tank filling process has a huge data gap regarding if the tank leaked.

This photo shows a tank filled with sand in the 1980's.  Problem is they did not remove all the oil in the tank, thinking that sand would absorb the oil.  You see the oil leaching out of the tank in the bottom of the photo.   many times you don't even know if the tank was properly cleaned of residual oil. 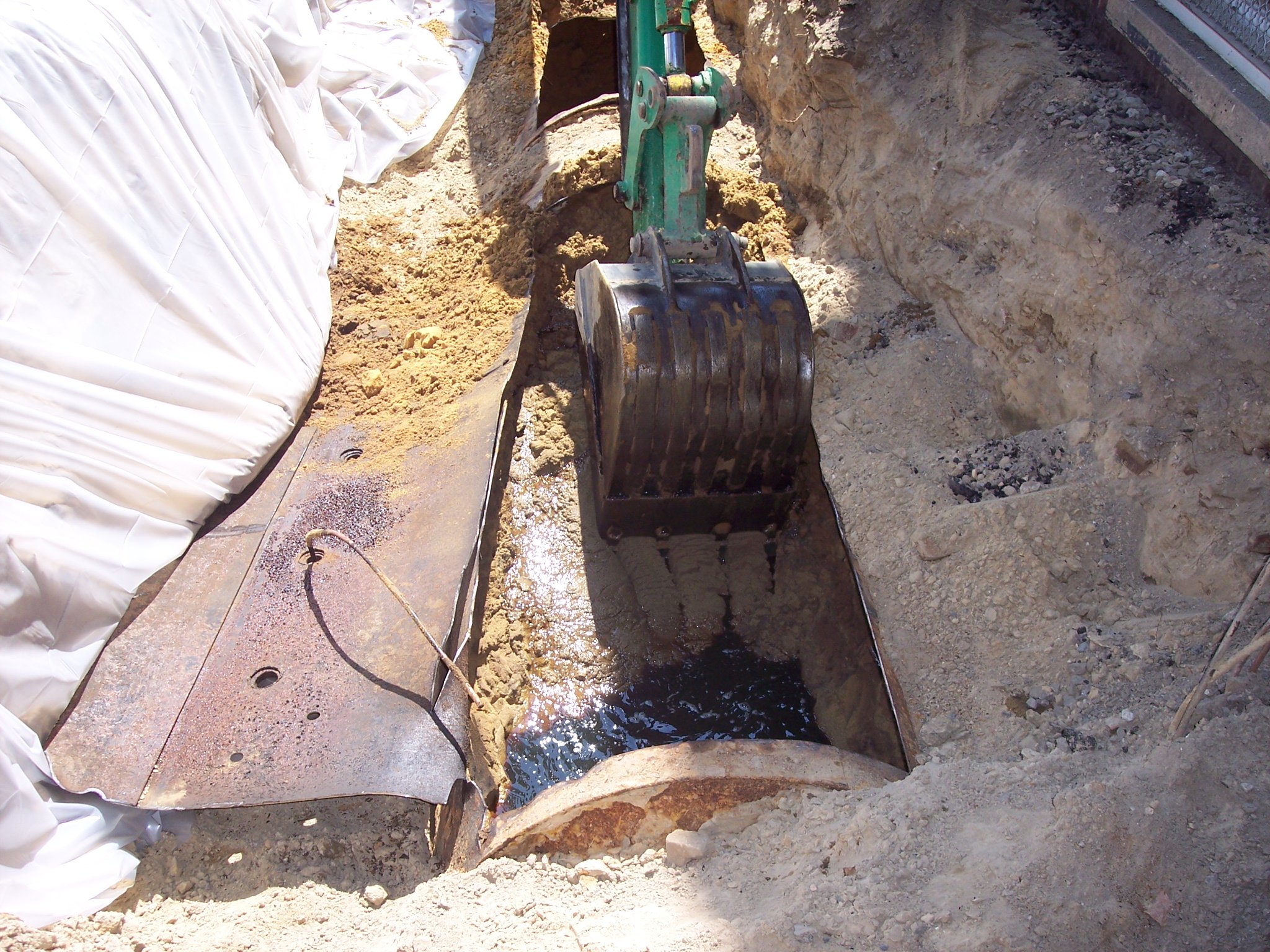 If the homeowner cannot provide a written report about soil testing completed on the day of tank abandonment,  you don't have evidence the tank did not leak, so yes the tank has to be removed and tested.

Look at it this way, the dentist visually inspects your teeth for cavities, but ultimately does an x-ray (a TEST) to evaluate for cavities.  The x-ray is the test to say no cavities, soil testing says your tank did not leak.

Another way to look it is, is if you don't see the soils below the tank you don't know if the tank leaked.  This photo shows a removed tank grave, note the oil staining the soils. 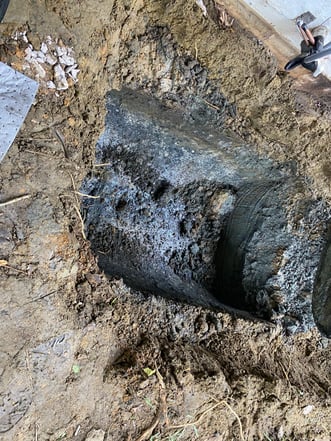 Many homeowners have discovered soil contamination exists around their buried abandoned oil tanks that their town or municipality considered properly decommissioned. These homeowners either paid to have the tank filled in place or previously purchased the property based strictly on the municipality inspector’s approval of the tank abandonment.  They naively ignored the fact that soil testing was not performed at the time the buried tank was abandoned in place with sand, gravel or foam.

Now these homeowners are selling their homes and are providing the buyer with all the municipality’s documents (permit) about the buried oil tank on the property. Since the homeowner provided no documents about the soil condition, the tank needs to be removed.

Common question from a property owner with a filled in place UST.

“The property I am buying has a buried oil tank that was decommissioned. The tank is filled with sand, gravel or foam. The owner provided permits  from the town  stating that the tank was properly abandoned and decommissioned AS PER THE CONSTRUCTION CODE. Is it  necessary to remove the tank?   The buyers are concerned about contamination.  The answer is yes the tank must be removed.