What is indoor Mold Air Testing?

When testing for airborne mold spores, samples are taken from "complaint" rooms for example - the basement, a bedroom, kitchen in short an area where there is suspect mold or some complaint with mold or heath concerns.  The testing inside typically has a background sample obtained, and often times  additional air samples are acquired from other areas of the building as a general background.   Generally speaking the more testing data you have the better the base of data that can be interpreted.

On a basic level of comparison when you perform mold testing you can also acquire a background air sample (sometimes 2) from outside. The exterior sample is the comparison sample as mold spores grow abundantly outside. You can also sample other non complaint rooms in the building as a general background of indoor conditions.  Airborne mold spores should, at most times, be higher outside than the same mold spores on the inside of the building when tested.  If you have a very high spore outside you would expect to find that spore inside, but at a lower concentration.    The caveat is when and where the outdoor sample is acquired, both for indoor and outdoor sample locations.  Indoors, room condition, possessions and other factors that can influence the sample results are factors to be considered.  Outdoor sample location, conditions outside, including weather and time of year, are factors in the equation regarding exposure pathways to the building from point of sampling, etc.

Want a professional review of your data?

We offer a flat fee review for data interpretation. *

Reviews are not free.

Just submit the form on the right side of this page and you will be contacted.

Does everyone who tests for mold know what they are doing?

Unfortunately many people who dabble in the mold world do not know what they are doing or how to interpret the mold testing data they have laboratory analyzed.  This can be confidently stated as our office gets constant phone calls from clients who had mold testing performed and the testing was never explained.   The knowledge and experience of the mold sampler is as important as the laboratory testing data.   As you need to have first hand knowledge of the area tested to interpret the analysis. 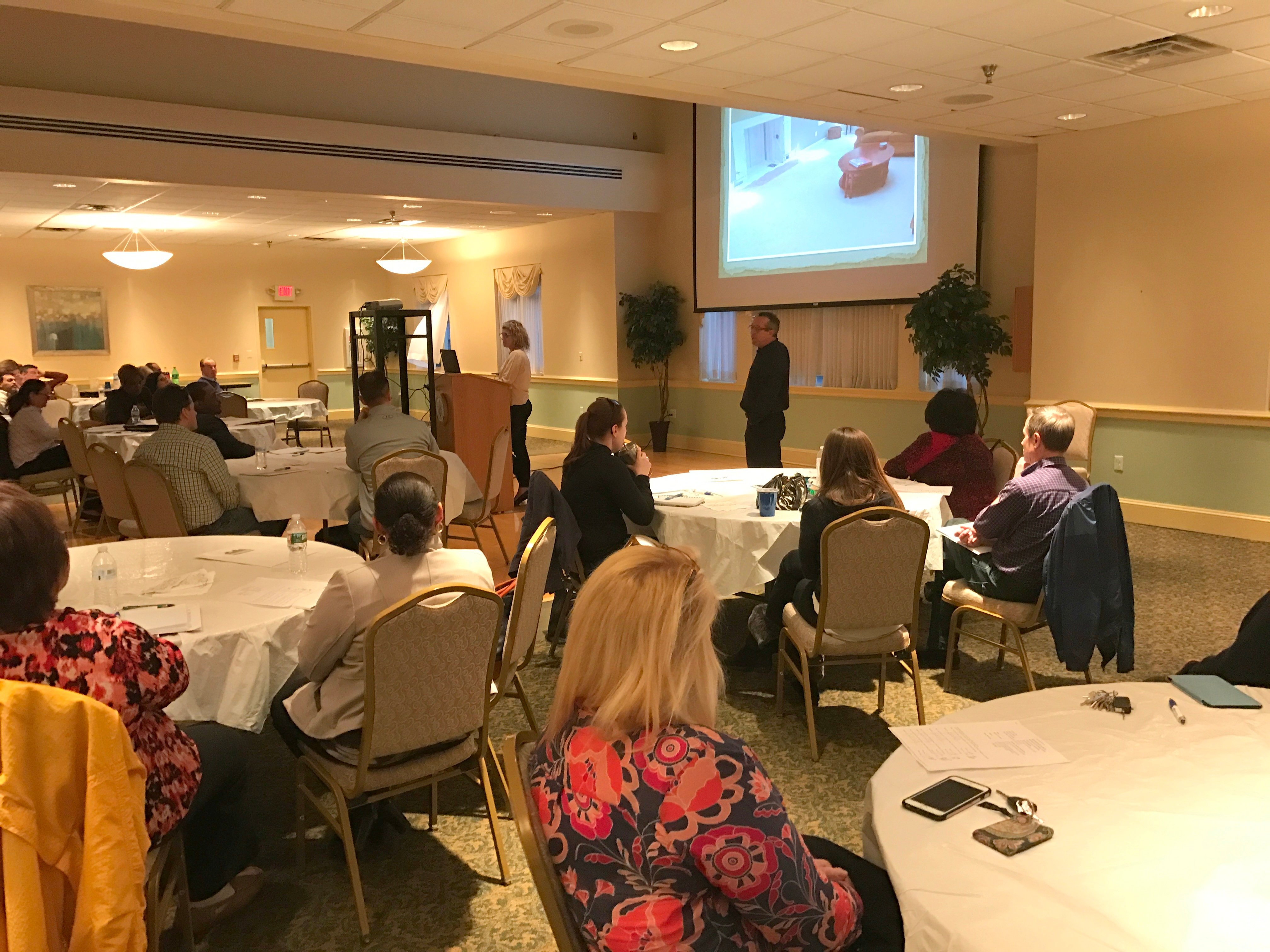 The people taking one of our mold classes complained that the room had mold. Testing revealed a very low mold count, our mold instructor was just teaching a boring mold class which accounted for the tired look on the attendees faces.  Just kidding, we know so much we actually instruct on the topic.

All mold samples can have bias and it is the responsibility of the mold inspector to take into account the room sampled and how the contents or condition of the room could affect the sample.   In short if you sample a room with say old boxes you could see a higher spore in the sample that is associated with growth on cardboard.  The mold professional has to be aware and explain how mold that is present on an item can influence the sample results.  Typical room items that can have spores that can influence results include:

As a general rule (most basic way to compare), total indoor airborne spore concentrations in a typical clean HVAC supplied dwelling are less than the “average” outside concentrations, hence the reason for the comparison of the outside air sample.*

*Outdoor samples can vary widely, from site to site (on the same day) as well as due to weather conditions, sample location, etc.  The ability of interpreting mold test data falls to the experienced mold consultant who can filter out unusual baseline data, meaning outdoor results that are out of range either high, low or zero!

Baseline samples aside, interior non complaint room samples can also be utilized to evaluate overall spore count, although this is not performed as frequently as it could be.  The airborne spores GENERALLY should be less than approximately 1,500 cts/m3. Aspergillus /Penicillium and other hyaline spores are on average less than 700 cts/m3. Indicator fungi such as Stachybotrys, Chaetomium can point to longer term water issues as these spores are late bloomers, so to speak. so their presence and concentration should evaluated.

Remember, there is always a likely exception to every rule or generalization, and because there is no direct relationship between the collected indoor and outdoor samples, performing a direct comparison with limited sampling can be and often is misleading. The range of expected variability when comparing limited data sets must also be considered.

We have sampled multiple sites on the same day with wildly different outdoor sample results.   If you compare inside to outside, you must take into account other sites sampled to understand and interpret variability.  We have completed thousands of samples over the past 20 plus years, so we have a leg up on data interpretation.

We also remediate mold, what you learn from opening up walls and climbing in tight spaces teaches you a lot about how mold grows and where. 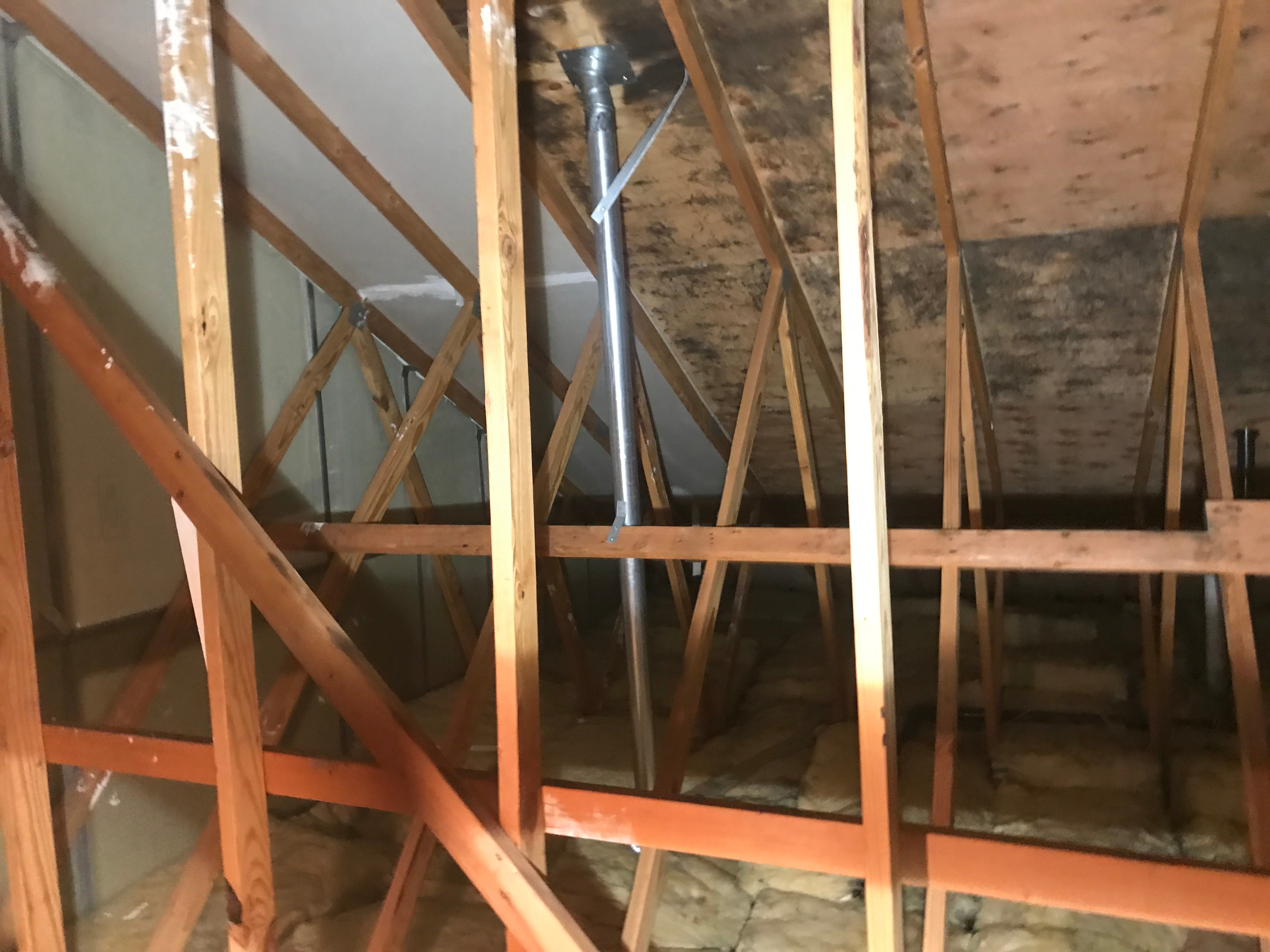 Penicillium /Aspergillus – the most common mold species to appear in indoor air samples. The majority of the hundreds of sub-species are allergenic; only a few are toxic. This group of species typically grows with the humidity in the air as its water source.

Cladosporium – the most common mold species and is considered to be an allergenic.  Certain housekeeping issues can be a contributing factor when elevated levels are noted, so room and building condition are very important to note to understand the results.

Chaetomium – a common water marker that usually indicates wet paper and/or drywall, that has occurred for an extended period of time.

Stachybotrys – the most common toxic mold species, but not all sub-species are toxic. These species need a direct water source to grow.

Memnoniella – a sister mold to Stachybotrys. The two species will grow together; also considered a toxic mold due to production of mycotoxins. Mold spore species and levels differ within each state (if there are regulations determined at all) agreements are hard to come by with analysts and scientists. A comparison to an outdoor air sample is usually used as the rule of thumb. The following mold spore ranges use the spore/m3 number and not the raw count for each species when interpreted in a lab.

Air Sample Report”.0-50 spores – these trace levels are not typically an issue. Finding Stachybotrys and other water markers like Chaetomium and Fusarium or high levels of Penicillium/Aspergillus can red flag an area.   Understanding how these grow and where in the room samples were acquired are key to being able to understand the results.

50-200 spores – still very low levels; the toxic mold species Stachybotrys and Memnoniella are some of the species to be considered an issue at this level.

200-500 spores – the most common species (Penicillium/Aspergillus, Cladosporium and Curvularia) are typically not an issue and stay within the normal range.

500-1500 spores – sometimes the Penicillium/Aspergillus & Cladosporium levels are in this range and do not require remediation. If water intrusion or mold was not found during the, these levels can be caused by normal life in an enclosed environment.  Again room and building condition.

1500-3000 spores – this points to an issue that may be apparent, unless a corresponding number in the outdoor sample exists. If water intrusion or mold issue wasn’t found, these levels can be achieved by a hiding behind a wall, newly flipped homes commonly have hidden mold.   Room environment including dusty home or type of HVAC system can have an amplification effect.  Further inspection is warranted.  Mold should be able to be visually assessed unless renovations covered over the mold i.e., a flipped house.

3000-10,000 spores – without a corresponding number in the outdoor sample, some remediation is necessary. A perimeter clean-up is needed if a mold spore source has been identified. If water intrusion or mold issue wasn’t found, the area may need to be cleaned and the duct system should be evaluated.  Mold should be able to be visually assessed unless renovations covered over the mold i.e., a flipped house.

10,000-25,000 spores – without a corresponding number in the outdoor sample, a mold spore source is usually identified and remediation is needed. If no water intrusion or mold issue was found (including behind walls), the duct system may need to be cleaned and a general cleaning of the residence could be a contributing factor.

25,000-75,000+ spores – a mold issue will be easy to identify. Clean up will be required and should be performed by a Professional Mold Remediator, remember approximately 11 states have mold regulations so hiring a state licensed mold company may be impossible.

*It should be noted if you are buying an older home, that is being flipped, air testing is highly recommended.  This is because flipped homes represent properties that have had deferred maintenance and were priced to sell below market rates.  Meaning the property was sold cheaply allowing the flipper to rehab the home and sell for a profit. Guaranteed the flipper did not account for mold remediation in the rehab budget.  We find remediation necessary is nearly 80% of homes that were flipped.  Meaning post rehab when the buyer hires Curren to perform a mold inspection we find mold.  It is a  high percentage and speaks volumes regarding why mold due diligence is so important.

That said you can also have testing performed that contradicts the visual assessment of the room.  For example you can sample  a room that has gross visible mold growth but you get results that are not what would be expected based on room conditions.    This is usually attributable to the sample collection process, including sampler, height of sample, air flow, pump calibration, damage sampling cassette, room temperature as well as a variety of factors.

Conditions under which indoor mold growth can occur include:

What is capillary action?

Adhesion of water to the walls of a vessel will cause an upward force on the liquid at the edges and result in a meniscus which turns upward. The surface tension acts to hold the surface intact. Capillary action occurs when the adhesion to the walls is stronger than the cohesive forces between the liquid molecules.

Moisture sources in buildings occur most commonly through moisture intrusion in walls and foundations, or as condensation around windows or in HVAC systems. In some parts of country such as the Southeast U.S. for example, the relative humidity during certain times of the year is high enough to act as a significant moisture source alone. Indoor food sources for mold can be any organic material provided by a flood or sewer backup or materials present in the dwelling such as carpet backing, linoleum backing, drywall paper, ceiling panels, or the buildup of plant and/or skin cell fragments or debris on inorganic surfaces. Skin cell fragments are a significant food and colonizing source where a high occupancy exists, or adequate housekeeping is not performed. Molds colonize most readily where air disturbance is minimal. For this reason, mold colonization occurs most frequently in closed or concealed spaces such as closets, storerooms, basements, refrigeration units; or on the back or underside surface of furniture. 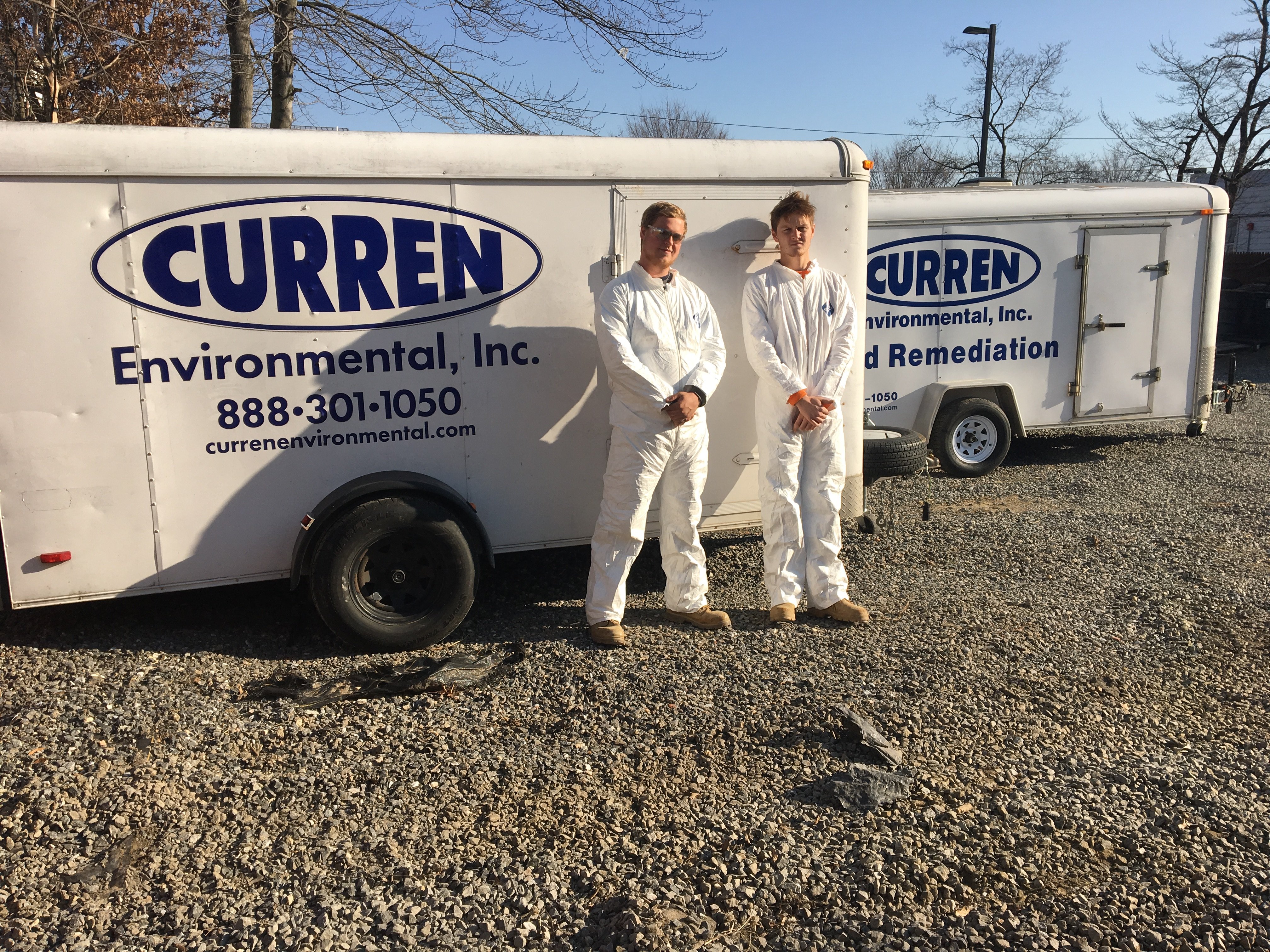 We can peer review your data. Prices start at $200.00 for most projects. Submit your information.