Discovering that you have a buried tank, removing it and finding out you have to spend tens of thousands of dollars to clean it up an oil leak is not what you would call good news, and you never used oil heat! 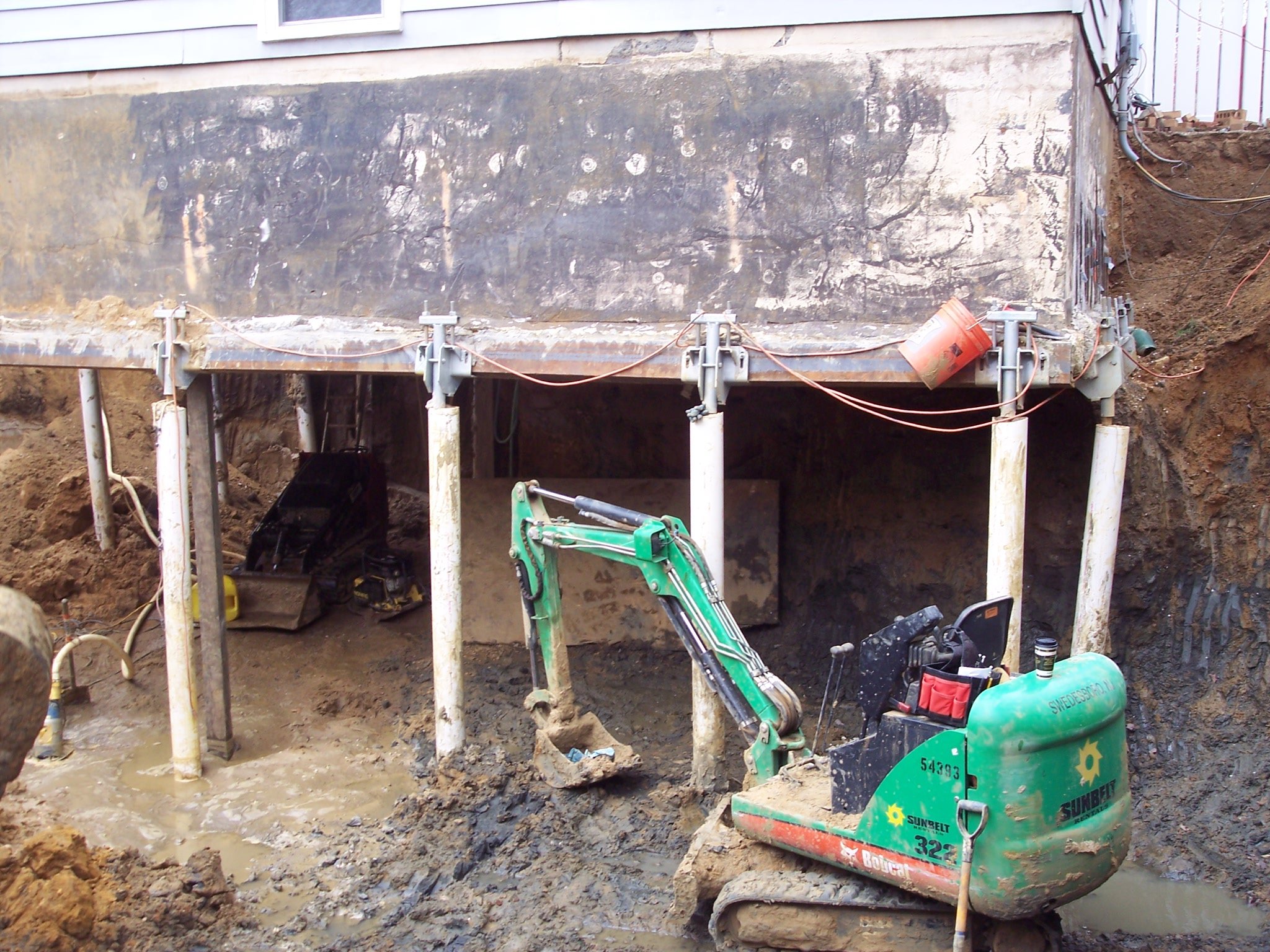 This situation is something no one wants to deal with but this is all too common, oil heat was king and most homes built before 1980 had oil heat at one time. Don’t believe me because your house is on natural gas? Well prove to me you always had gas, if you can’t you had oil most likely.  To be fair things don't look the same today as they did years ago.

People know what a Home Inspection is but a tank sweep can be a foreign term, even to veteran realtors and attorneys.   Although we have been doing tanks sweeps for over 20 years, we still come across people who don’t know what one is or understand they need to do one. 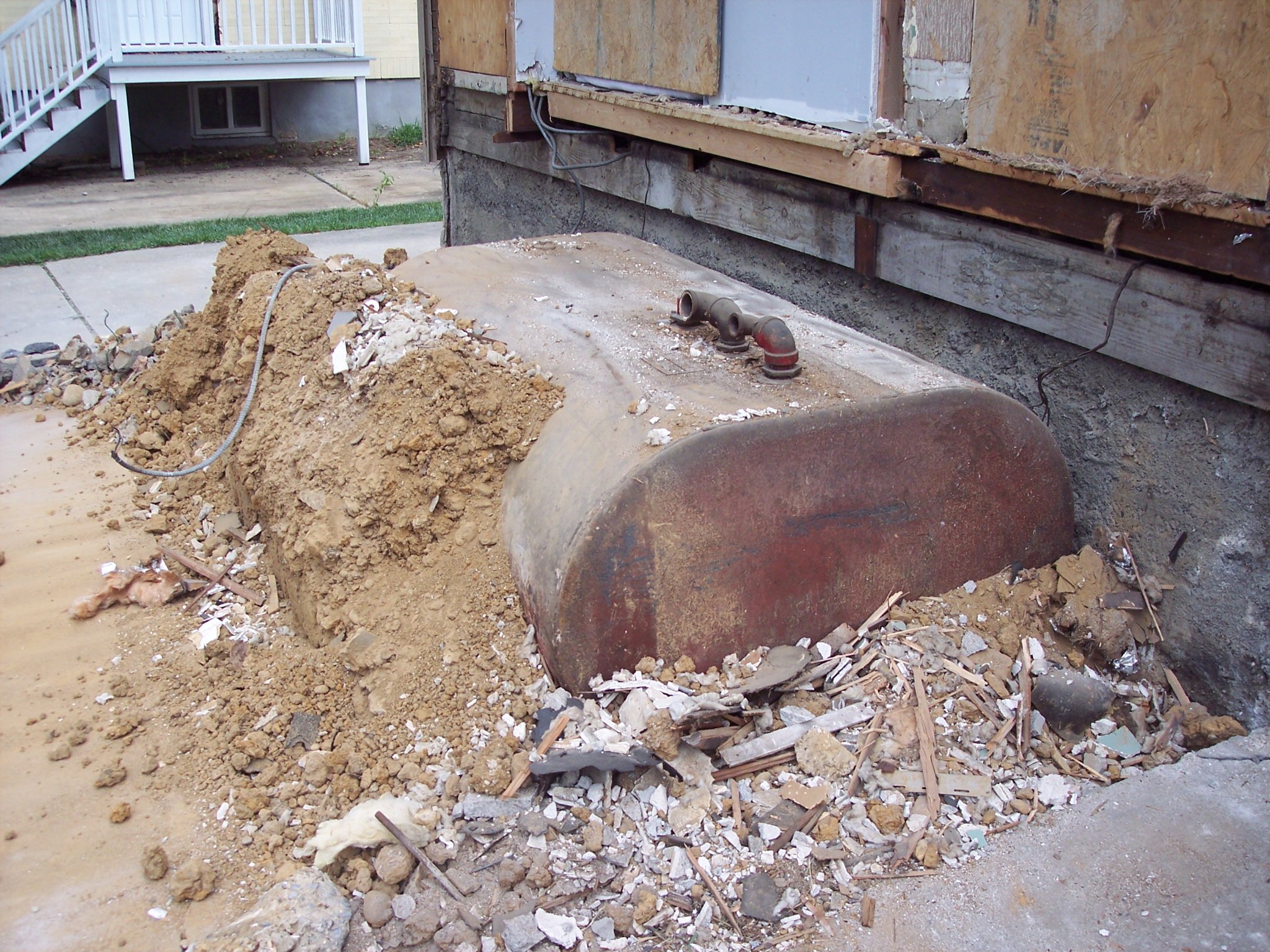 Why do a tank sweep?

Whether you’re selling or buying a property it is prudent to do thorough due diligence and evaluate a property for an oil tank.   Aside from a Covid-19 induced frenzied housing market, doing inspections of a home prior to purchase protects your financial interests prior to purchase.  Home inspections do not include tank inspections.  So if you are buying an older home, a tank sweep needs to be added to your inspection list.  Know this: 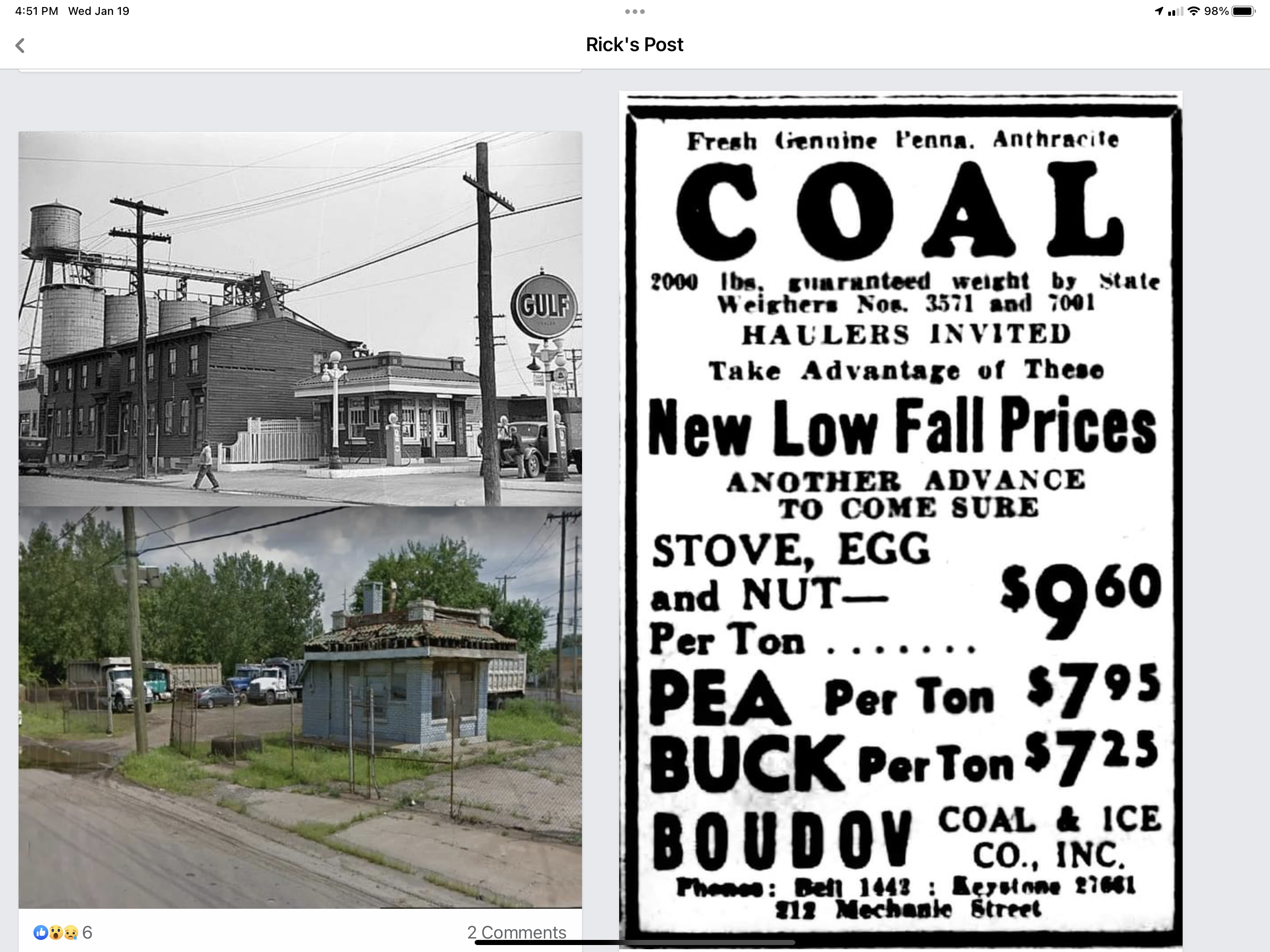 The photo below is Sears Kenmore brand of appliances and low and behold, Kenmore made oil fired boilers. 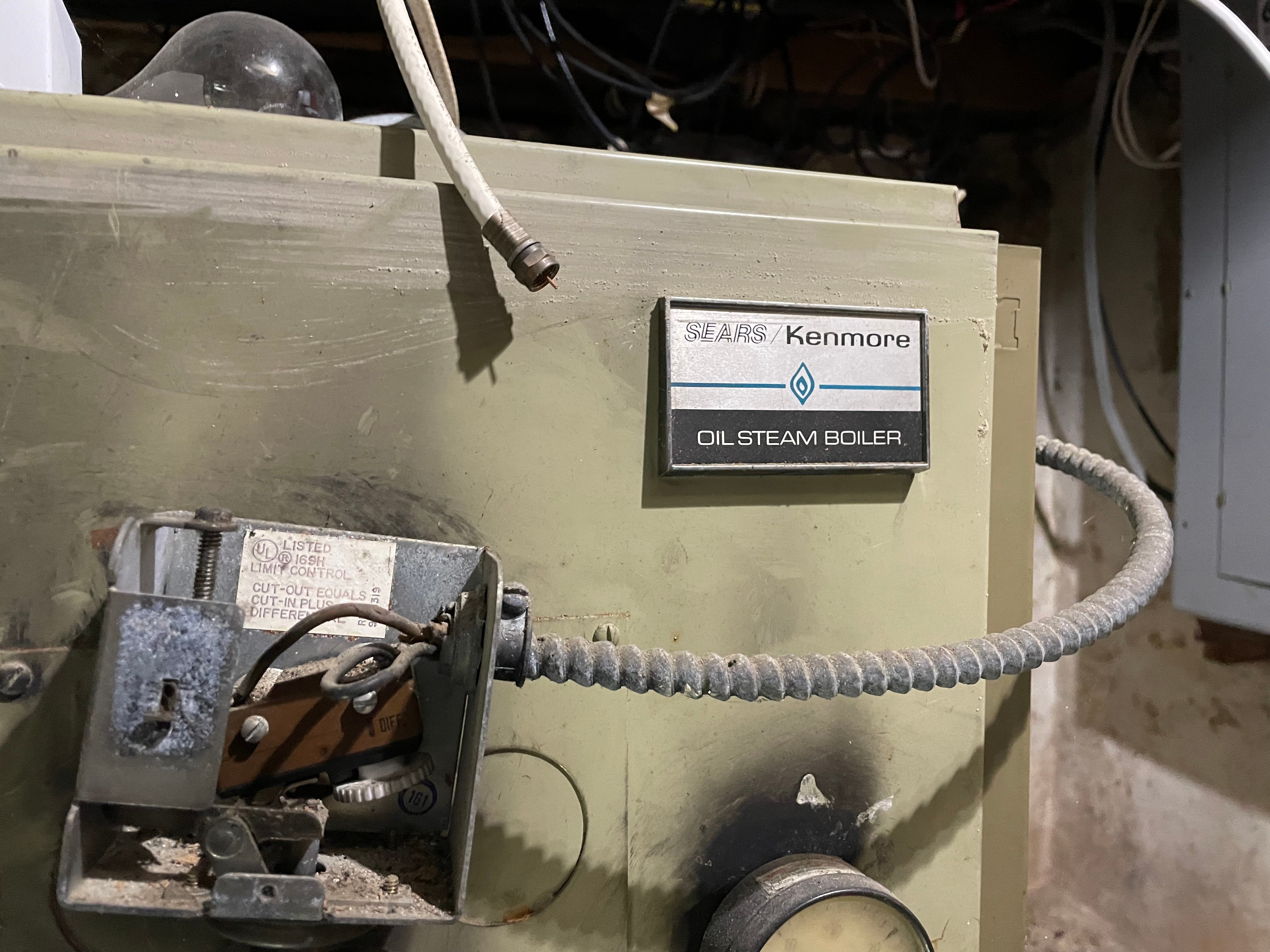 Gas while available to homes, was a monopoly and expensive, so the local fuel oil dealer who supported your local little league team and would ensure you always had oil in the tank was the preferred purveyor of energy.  When natural gas was deregulated in the 1970's and oil prices shot up, gas started to become more appealing.

New homes were built with gas, but older homes also converted to gas, but it was expensive.   To cut down on cost homeowners abandoned oil tanks.  Remember buying a new furnace cost thousands, maybe you also replaced your hot water heater, not leaving much money in the budget to remove the tank.

Metal oil tanks were left in the ground to rust and leak oil.  Todays environmental regulations require these tank leaks to be remediated.

It goes without saying that older properties should have a tank sweep, because natural gas was expensive and oil was not up until the oil embargo and gas deregulation in the 1970’s. Although newer properties should have a tank sweep, because it is always possible they could have been constructed on a site that has a UST (Underground Storage Tank) that was not disclosed or ignored.

Many homes were heated using oil at one time or another, including ones that have gas service today.  Some tanks have 2 tanks.

What Are Underground Storage Tanks (USTs)?

A UST, or Underground Storage Tank, is a tank that was once used to store heating oil that was used for heat and sometimes hot water. Oil replaced coal, which required shoveling. 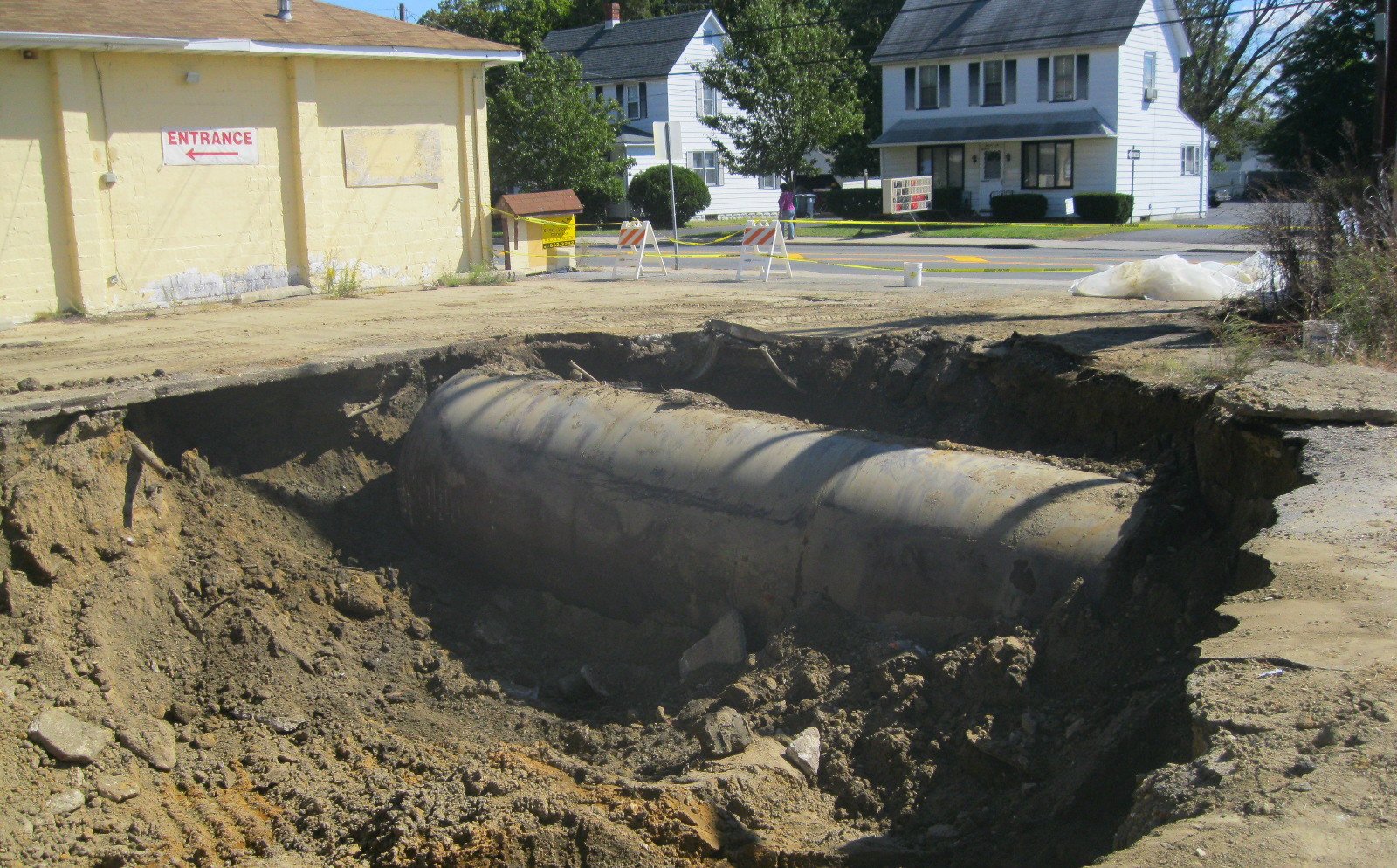 How do I Know If My Property Has A Hidden UST?

Since by their very name underground storage tanks are buried below ground.   The average person does not have the experience or tools necessary to be able to tell if a tank is present on a property.   You need an environmental company that does specific inspections for tanks. The service can be called a tank sweep or a geophysical survey.   Tank sweeps are a specific inspection to look for evidence of prior oil heat. 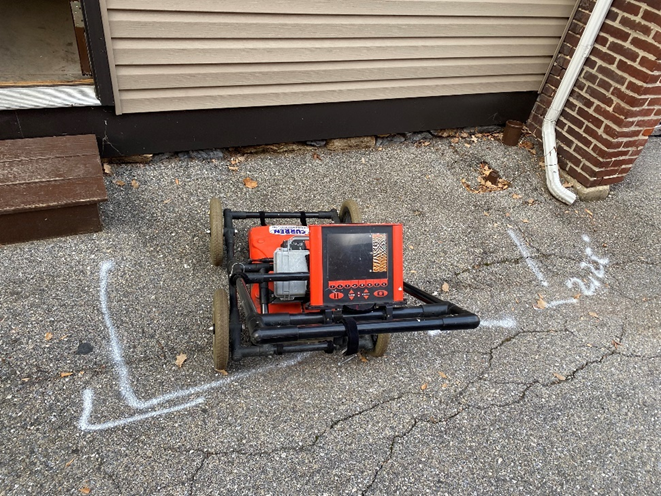 How Is A Tank Sweep performed?

First, the property is evaluated online for date of construction, to see it is viable to perform a sweep.  meaning is there a reason why not to do the sweep.

Next you ensure that the owner is questioned regarding prior oil heat. This sounds simple, but if they removed a tank, we won’t find that tank. Although some properties have had 2 tanks. By asking the owner, you are also making public your concern about oil tanks, so if we find a tank they are not surprised that the tank needs to be removed and tested. We call this managing expectations.

We remove thousands of tanks a year and can provide costs for tank removal in conjunction with the tank sweep report.

Next is the physical inspection of the property, inside and out.   A  tank sweep will include visual evaluation, looking for clues as to prior oil heat.  If you remove tanks, you are well trained regarding what to look for.

Aside from looking for evidence, high tech equipment is utilized to scan for tanks such as Ground Penetrating Radar (GPR) to scan the property. 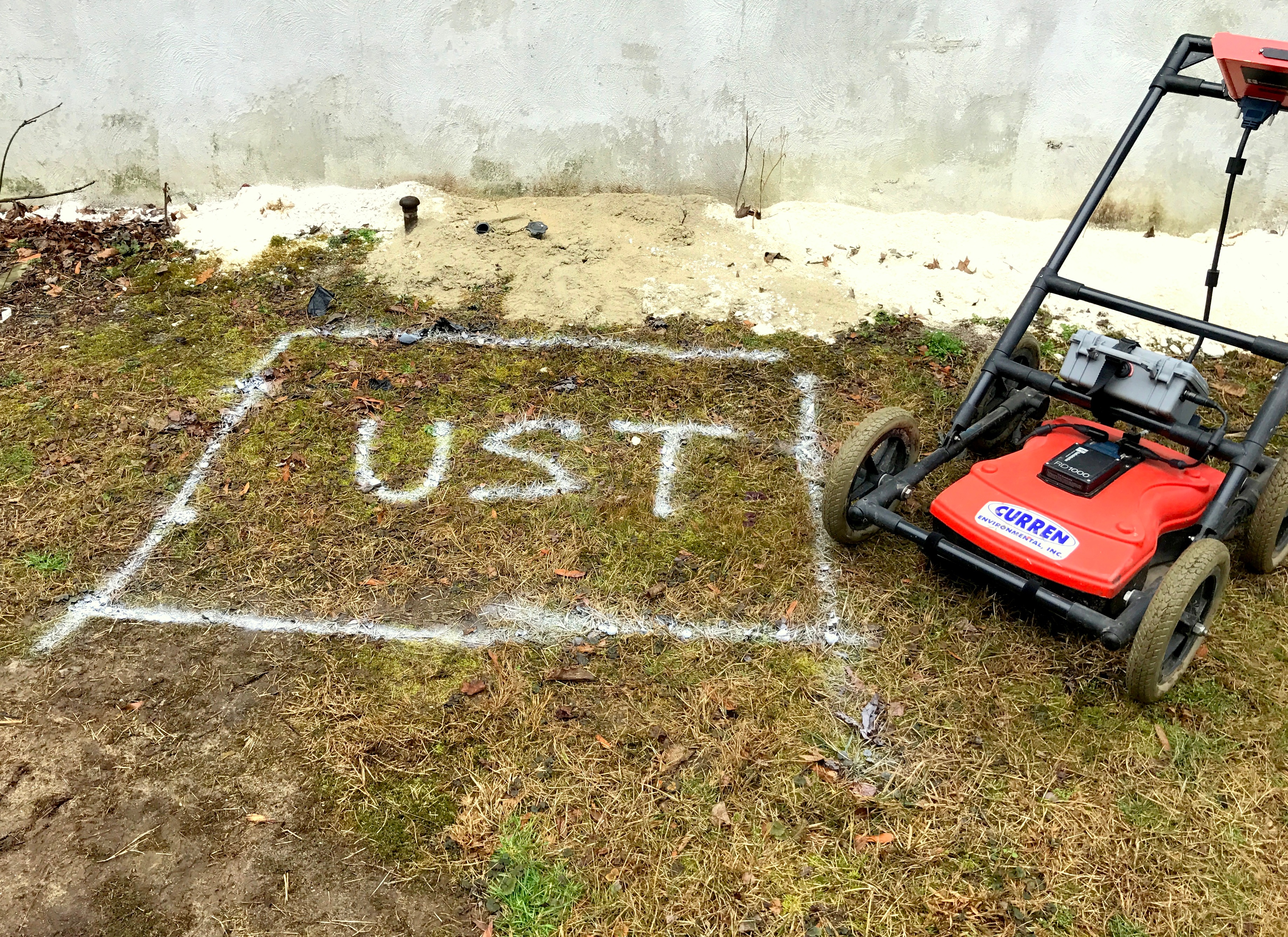 Who Should Pay for The Tank Sweep – The Buyer or The Seller? 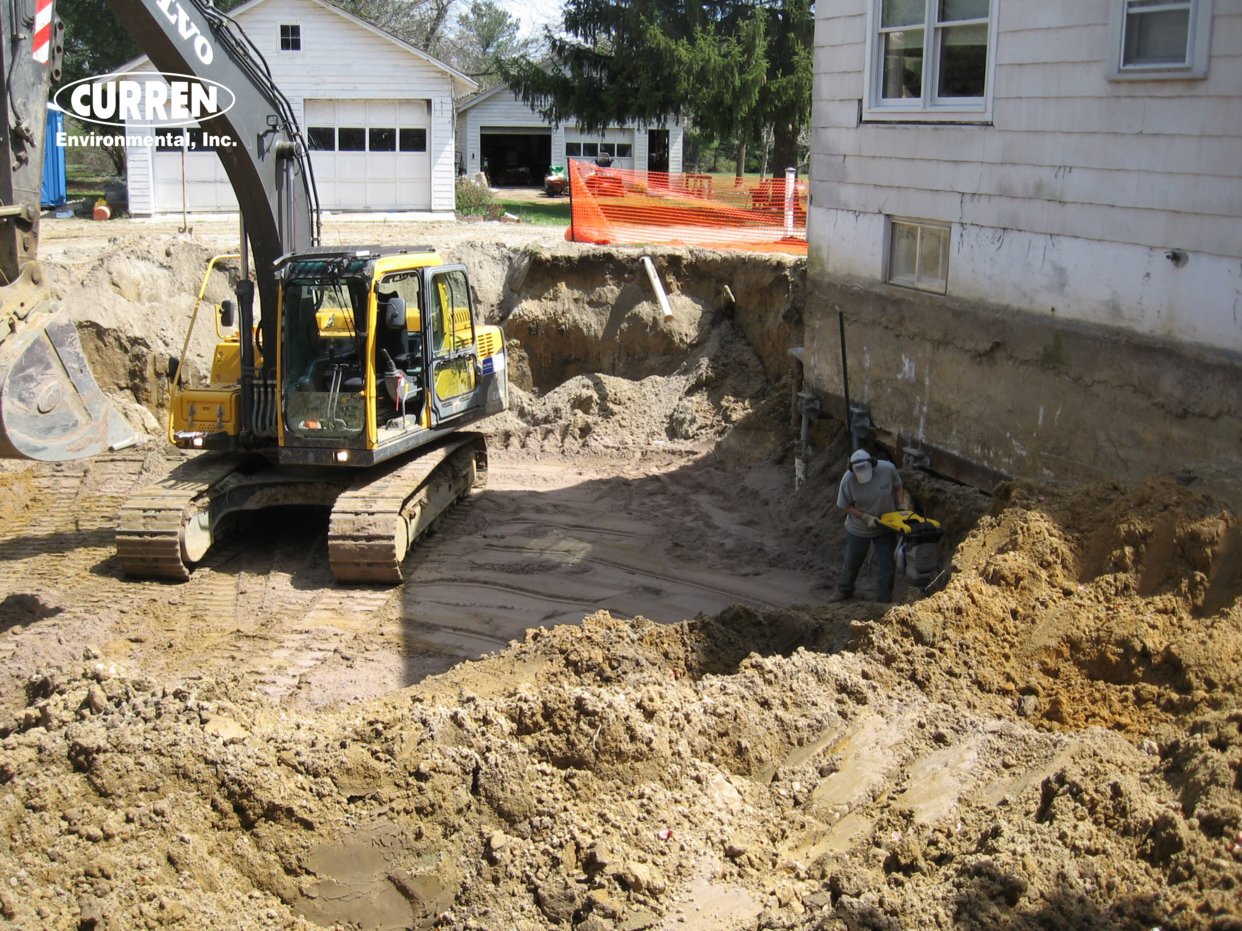 Some proactive homeowners will have a tank sweep performed before they sell, so they are not surprised during the buyers inspection.   To be fair this is maybe 15% of clients, most people don't want to look for a problem, but there are many honest proactive people out there as well.

How Do I Prepare the property for a tank sweep?

You will need to ensure the technician can access basement (HVAC area) and no cars are parked in the driveway.

What will happen If you find a tank?

If you find a tank it should be removed and tested to ensure no contamination is present above applicable standards. Levels above standard require remediation, which is the process of cleaning up the oil and is expensive.

If we find a tank should I back out of the contract?

No, don't walk away, there is no way to guarantee that the next home doesn't have a tank.   Now we say this with the caveat that after you find the tank the seller will address the tank before settlement.  Meaning removal and testing.  If they are unwilling, well then you have to think hard about how much risk you are undertaking if you purchase the property.

What if you find a tank and the owner suddenly has documents about the tank being filled in place? 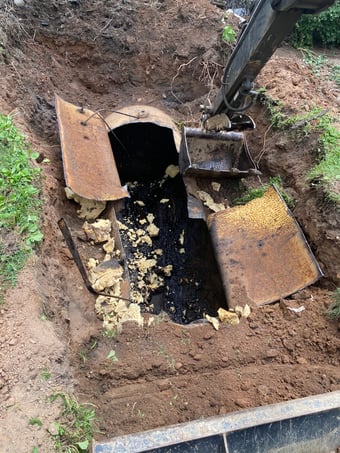 This is pretty common and the advice is always the same, unless you have a report documenting that the tank did not leak, you need to reverse engineer the prior tank work, by removing the tank and testing the ground.

Pro Tip: many filled in tanks were not cleaned of oil and leaked post closure.

What if you discover that a tank was present, but has since been removed?

Well the concern is if the tank leaked. Sans a report documenting the tank was removed and tested, you are now tasked with testing the former tank location. This is not as easy as it sounds because you likely do not know the exact footprint of the removed tank so you end up having to drill rows of borings to evaluate the area and hopefully find the tank area. Not much different than finding a knitting needle in a hay stack. 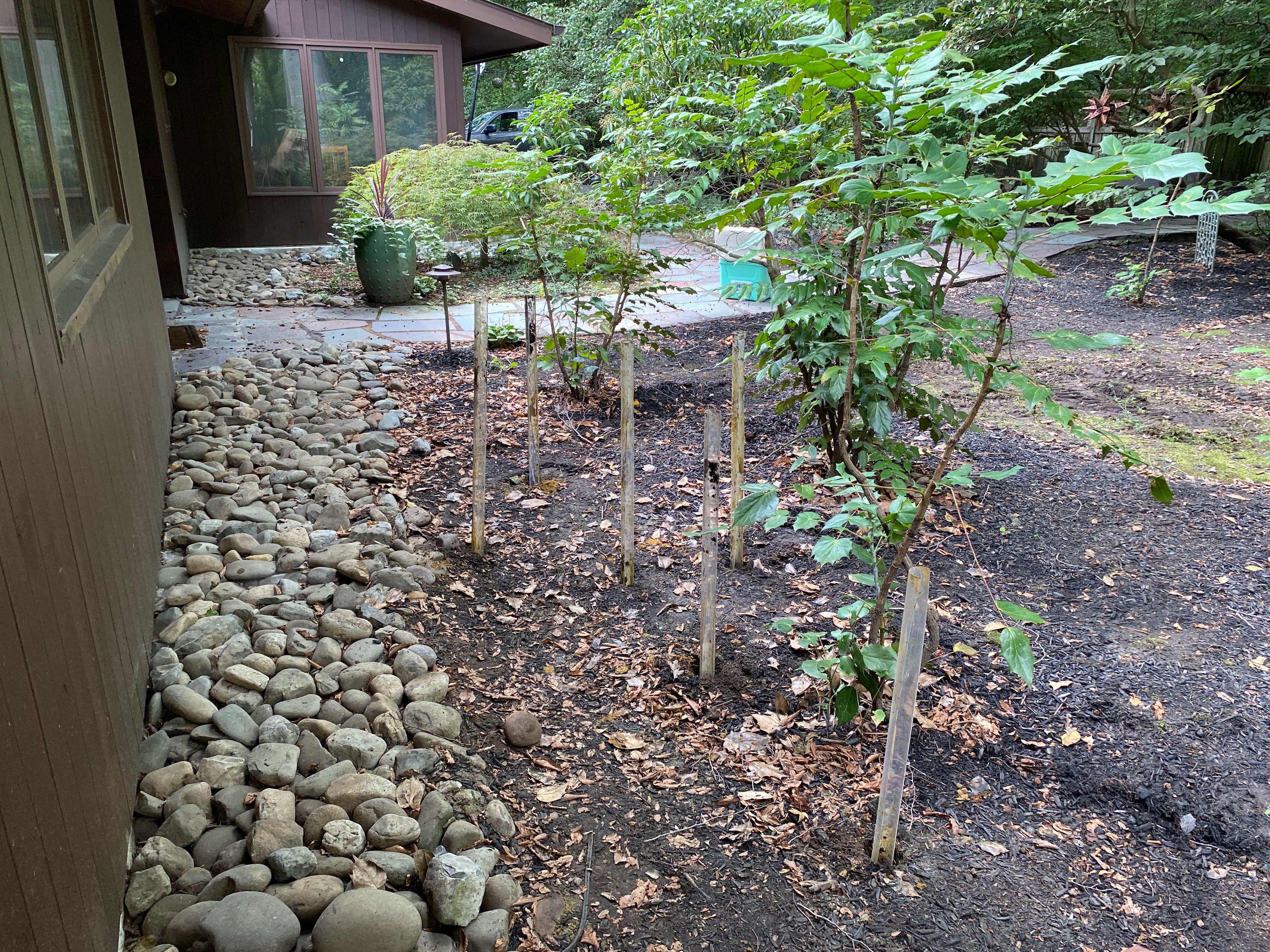 Pro Tip: You do the borings so you don't end up with a cleanup in the photo below which cost just over 30k 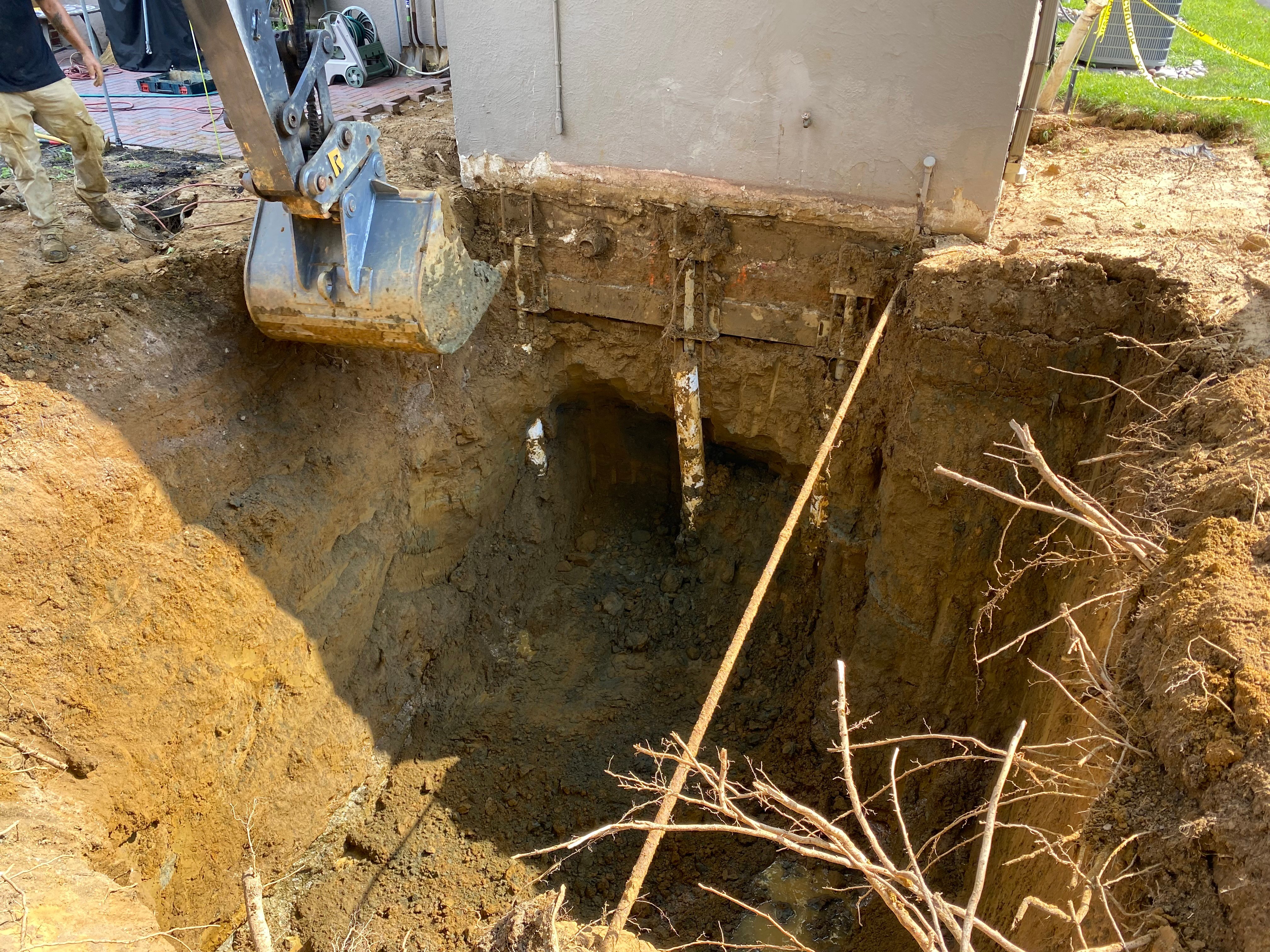 What if the owner of the property had a tank sweep?

Ask for a copy of the report, we often find this situation and better than 70% of the time there is no report of the tank sweep or the document they have is inferior.  By inferior means, they used a metal detector, which is not sufficient to scan a property for a tank, or the report is vague.

Is a metal detector sufficient to do a tank sweep?

You would never simple rely on a metal detector on a commercial site to scan for a tank, so why would it be sufficient for a residence?  It wouldn't, because it would not be thorough.   Metal detectors are no discriminatory, meaning they can detect all sorts of metal, which can cloud the results of a tanks weep.  Meaning you may have wire mesh in concrete and a tank buried under the concrete.  Well the metal detector cannot separate the two metal signatures.

GPR can give you a visual image, such as the one below. 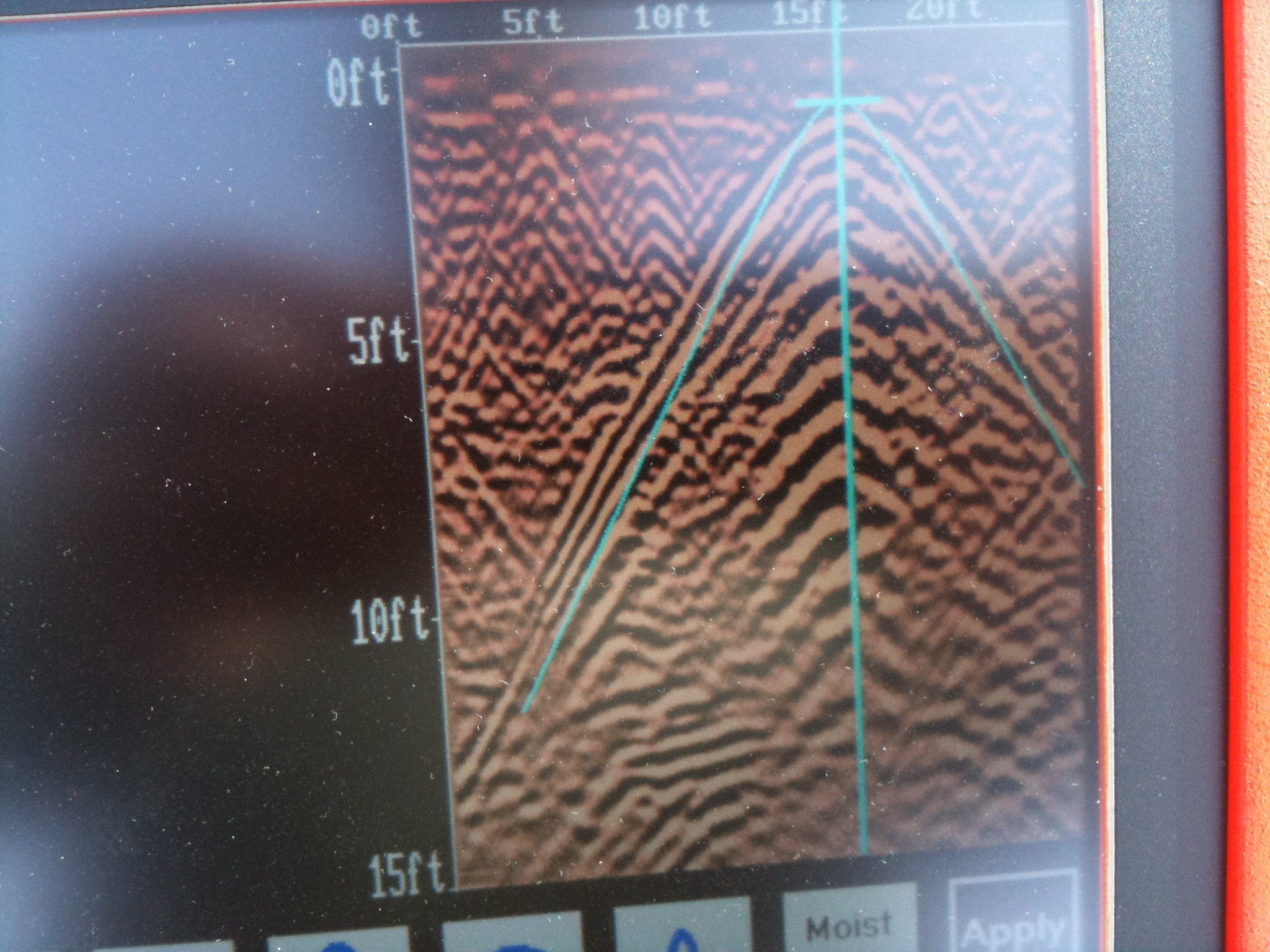 Will a tank sweep identify the possibility of a previous oil tank that might have been removed?

Bottom line tank sweeps are meant to find intact vessels (tanks). That said we have removed tens of thousands of tanks and have seen a broad spectrum of tank installations, so to say we are experienced would be putting things light.  It is not all uncommon that our technicians will find historical markers of oil usage and this will be flagged out in the report.   These markers can usually point to a general area where a tank was removed and would lead to the recommendation that soil borings be completed, as we referenced in an earlier questions.

We should also note we can find indicators of a prior tank and where that tank was may not sit an addition, garage, deck, patio, hot tub, sun room, shed, etc., again we see so many sites nothing is really that unusual. 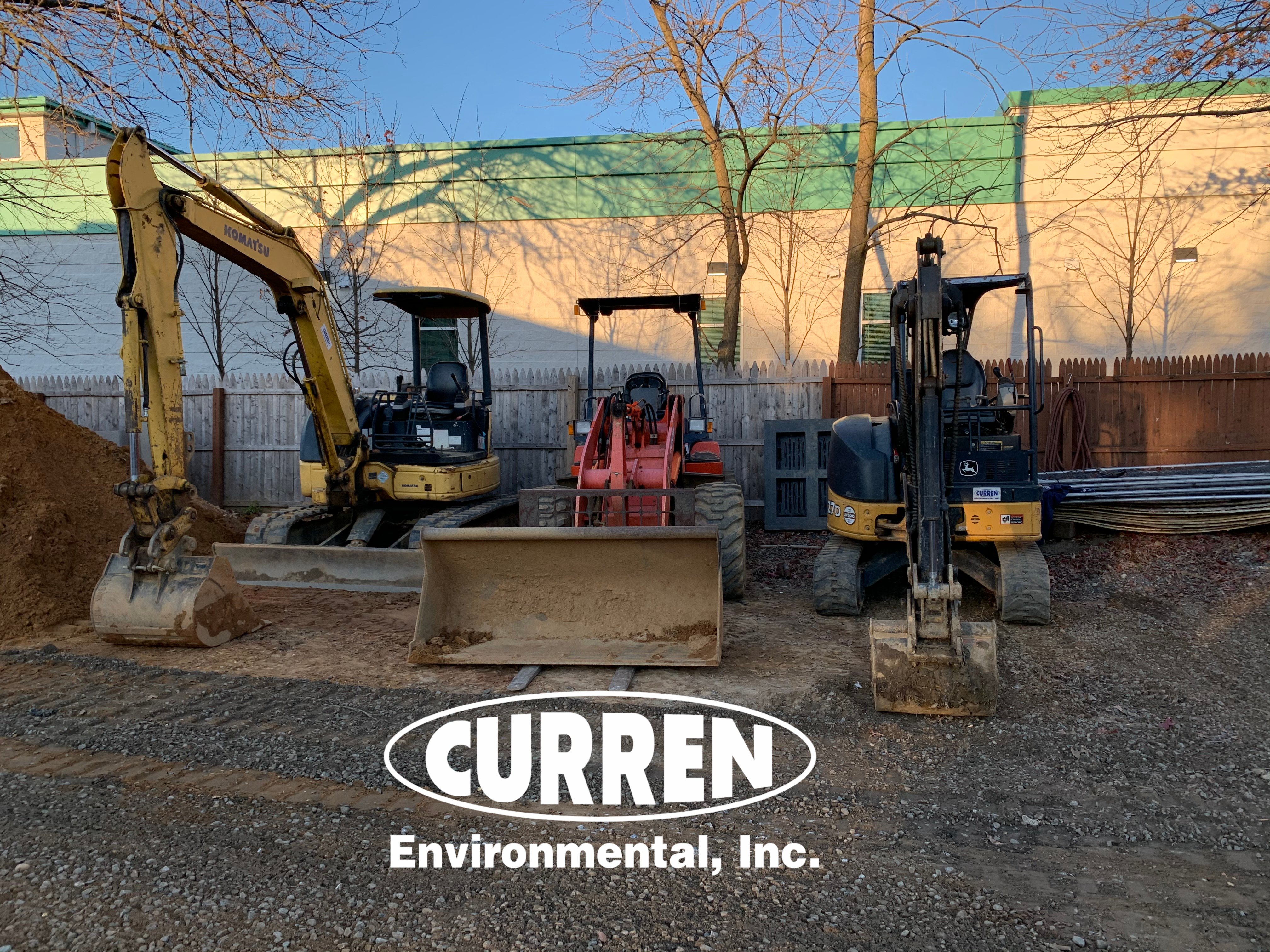