Any  real estate transaction that involves an oil tank, will most likely require documentation that the buried oil tank has not leaked.  Many people had their oil tanks abandoned when they switched to either an Aboveground Storage Tank or converted to natural gas.    These tanks were abandoned by either disconnecting the tank piping from the heater/furnace, cutting the fill pipe below grade and capping the fill pipe with concrete or the homeowner actually had the tank filled with an inert material such as sand or foam.  These filled in place tanks can derail a real estate transaction.

At Curren Environmental, we consistently receive calls regarding properties where an oil tank was previously filled with sand. Sometimes the owner has an approval sticker from the municipal construction office, other times they do not. Rarely if ever is there any report narrative and testing data available to document that the tank did not leak.  Sometimes the township no longer has a permit record, so it is just a lot of he said she said.

For the record, no pun intended, the local approval is always meant to document a construction activity, in short that the tank was filled (meaning work was performed) however this permit does not give evidence that the oil tank is clean, tank did not leak.  Construction permits approve construction activities not environmental contamination..

The problem with tanks that were previously abandoned in place is you don't know if the tank was properly cleaned (i.e., devoid of all residual oil and this was an empty metallic shell) and then filled with sand.  The below tank was filled in place but never completely cleaned of oil. 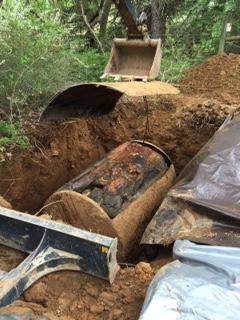 The oil that was left in the bottom of the tank leaked out and was found in the  excavation after the tank was removed. 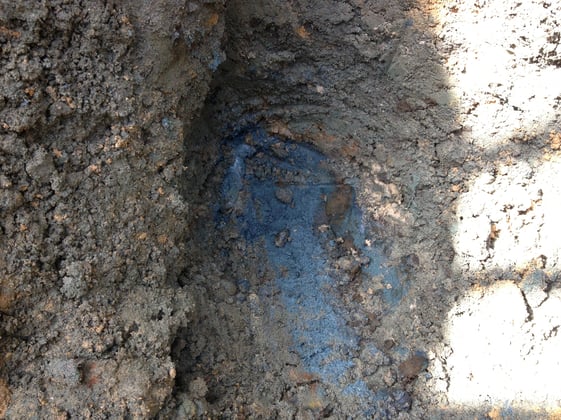 As you can see just because something was done to the tank, doesn't mean it was done properly.  Many sites where underground oil tank were filled and a local permit was filed you have no assurance that the tank did not leak, and the soil is not contaminated. 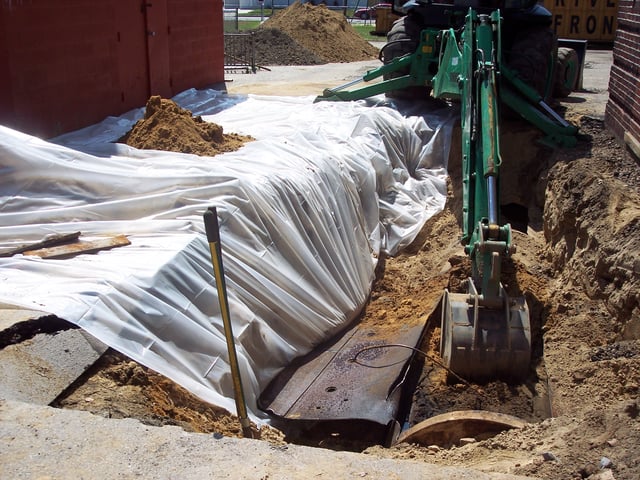 This filled in place was removed by Curren 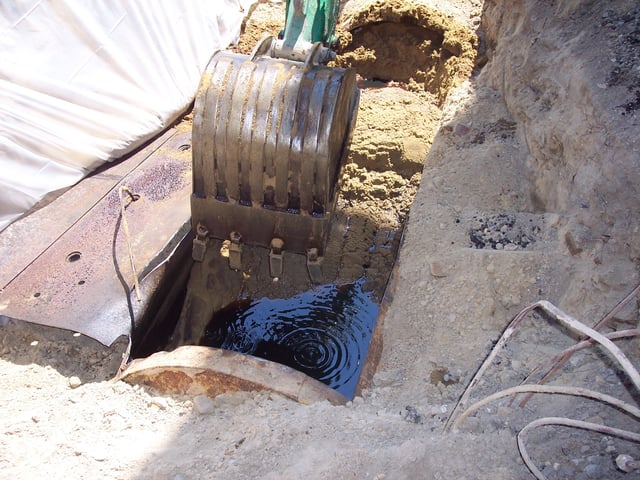 Curren found oil remained in the tank.  Sand does not absorb oil.  This tank was not cleaned.

As you can see from the photos, filled in place oil tanks are not as innocuous as they sound.  Here is the rub, so any property owners say they had  documents saying the tank was inspected and certified for leaks.   Yet when you ask for information to verify that, it typically is not available or the documents do not clearly state that the tank did not leak. So now you have a tank that was abandoned in place with little to no documentation that the tank did not leak and this is the house you want to buy or sell. In a scenario where a Buyer knowingly buys a property with an untested tank and later finds out the tank leaks, this new owner is responsible for the remediation.  This may happen years after you buy the house with an abandoned tank.  The next buyer maybe stricter than you and require the tank be removed. Removing the tank may find contamination, which can trigger a claim to the insurance carrier, which will be denied, as new policies typically exclude oil tank releases. Homeowner can then sue the carrier, the carrier defends and wins but monies are spent on a suit that was unnecessary. This scenario tilts the insurance carrier to not want to ensure a property with an untested tank. Meaning if you tell a home owner's insurance carrier you want insurance and the house has an abandoned oil tank, they may want it removed prior to writing the policy.

On the mortgage side, the mortgage companies don't want to give mortgages on properties with abandoned untested oil tanks.  They do not want the borrower to encounter a financial loss that would deter them from making mortgage payments. Unfortunately, many people have walked away from properties with environmental tank leaks due to the expense of the cleanup.   Lastly, as sour grapes gestures buyers will sue the seller, thinking the seller withheld information on the tank, meaning the seller knew the tank had a problem. These are the triggers for buyers wanting closed and filled oil tanks removed and tested.

The best approach is for Sellers to address these tanks prior to a sale to maintain positive control of the project.

Let’s face it if there is a problem with the oil tank it is the owner’s responsibility to address the problem. Regulations in New Jersey can be confusing and complicated, but if you own it you are responsible for it.

Buyers can and do have tank scans done as part of their inspection of a property and abandoned tanks will be found if not disclosed.   Learn more here.  Tank Scans

So what happens when you remove the filled in place underground oil tank? You have two possible scenarios, (1) if the tank was properly cleaned (i.e., devoid of all residual oil) and filled with sand, then the sand will be removed and staged on site for your use. The fill cannot be reused to back fill the tank, as NJDEP regulations require the fill material to be certified clean AND come from a virgin source. Soil removed from an oil tank does not meet the virgin source definition. If in the event that the tank was not cleaned and then subsequently filled with sand, then the sand in the tank is likely impacted with oil and will need to be properly disposed of at an off-site facility. (2) an oil and sand filled tank (No sand does not absorb oil, it is used to make glass and is not porous) that has been left unchecked will cause a problem not from the tank leaking, but rather from the tank overflowing. You see when you fill a tank with sand, you cut a hole into it to allow sand to enter. If oil is left in the tank, you have an oil and sand mix. Add rainwater entering the tank through the hole placed in the tank and you have a bathtub affect that will allow the oil and water to not mix (oil floats on water) and the oil rising to the top of the tank and overflows into the ground.   We had a situation that was identical to this, $19,000.00 later it was resolved  The photo collage shows you the process. 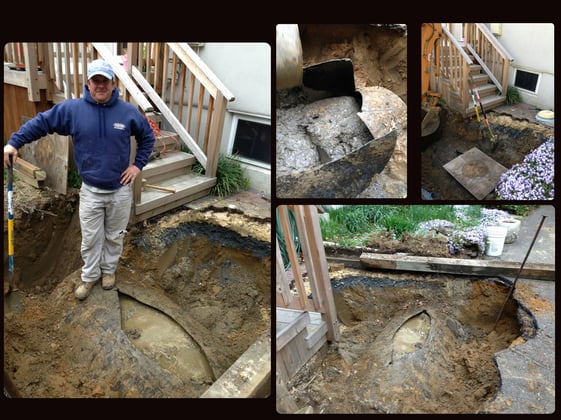 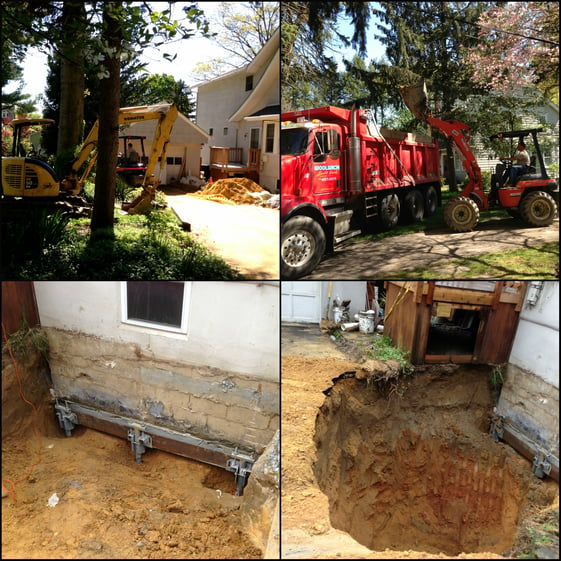 Owners, abandoned filled in place oil tanks CAN BE AN ISSUE, be safe, remove the tank, have soil testing completed and properly address the issue, do not be an ostrich.  Buyers, you need to know what you are buying and if it is a property with an untested abandoned oil tank, have it removed and tested as part of the agreement of sale.

Lets talk about the flip side of the coin, and that is a tank that was cleaned and abandoned in place. There are many of these tanks, but the majority of these tanks lack documentation that a buyer, buyers attorney, insurance carrier or mortgage company would consider acceptable to document that the tank did not leak.

Lets talk about the positives of abandoned in place tanks. 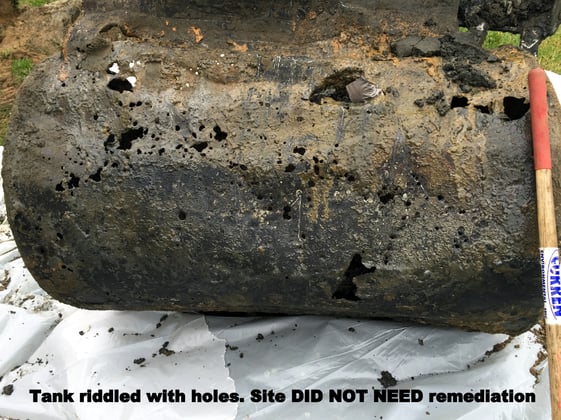 At Curren we offer a free initial consultation,  contact our office Monday to Friday 8:00 am and 5:00 pm. EST