Vapor intrusion is the migration of compounds, most typically, volatile organic compounds (VOC) from the subsurface into overlying or surrounding buildings. These VOCs can include not just volatile organic compounds, but also select semi-volatile organic compounds, radiological constituents (i.e. radon) and inorganic analytes (i.e. mercury vapor).  Vapor intrusion or VI takes place due to the presence of mobile chemicals in the subsurface soil or groundwater on a property.  These compounds follow a geologic or manmade pathway below grade that allows the compounds to enter a structure with human inhabitants.  A typical residential vapor concern is the presence of petroleum vapors which enter the home from heating fuel underground storage tanks.  Also, properties located within close proximity to potential off-site concerns such as gasoline stations, dry cleaners and other light industrial/manufacturing facilities could become impacted by the off-site issues as the contaminants migrate beneath the ground.  Vapor intrusion has become a significant environmental and health concern for building inhabitants.  Both on a national and state level, regulators are drafting and enforcing vapor intrusion regulations to protect human health. 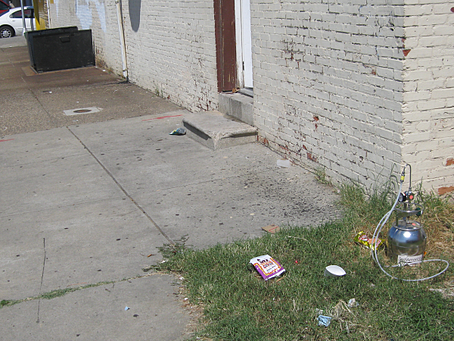 While Vapor Intrusion has come to the forefront of more public remediation projects, inside the environmental community there still exists a current lack of knowledge about indoor air issues and evaluation techniques.  Many inexperienced environmental companies oversimplify or are unaware of the potential VI issues.   Well rounded experienced environmental firms evaluate and address potential VI issues during the investigation and remediation phases instead of after these phases of the project.    Since VI issues create an immediate threat to human health, vapor intrusion issues should be address as early as possible in an environmental project instead of later, when the remediation could physically be complete but VI issues remain. This proactive approach reduces project costs by eliminating the need to reopen an investigation and/or revise remedial plans for a project after the fact.   Lack of knowledge regarding indoor air quality issues and cost considerations tend to contribute to the omission of proper indoor air sampling techniques and the installation of improper or ineffective VI remediation methods.

Curren Environmental is experienced in both the evaluation and remediation of indoor air and vapor intrusion projects.  Our qualified project managers can evaluate a project for VI concerns, propose and implement sub slab and indoor vapor sampling as well as implement remedial vapor mitigation systems.

The NJDEP has been a leader in the evaluation, quantification and resolution of Vapor Intrusion (VI) Issues.  The NJDEP initiated the evaluation as early as 1999 via the guidance document Indoor Air Sampling Guide for Volatile Organic Compounds.  The NJDEP built upon this original document in June 2005 with the preparation of the Draft Vapor Intrusion Guidance document.  The NJDEP adopted the current version of this guidance document in October 2005.  The basis of the document was the use of conceptual site models for the migration of vapors from the subsurface to nearby receptors.  The guidance document recommends the assessment of structures that are located within 100 feet horizontally or vertically from shallow ground water contamination areas for contaminants other than petroleum for which the NJDEP considers structures within 30 feet of the impacted zone to be of most importance.

Vapor issues can result from a variety of contaminants including volatile organic compounds (VOCs), select semi-volatile organic compounds, radiological constituents (i.e. radon) and inorganic analytes (i.e. mercury vapor).  Elevated contaminant concentrations in the subsurface can produce a vapor phase which can be transported via ground water or soil gas into nearby structures.  The vapors collecting beneath or against the floor or foundation of a structure can then enter the structure via cracks, seams, drains or sumps.  Indoor air concentrations of contaminants which are lighter than air in the lower levels or the structure could create issues on the upper floors, particularly of residential structures, so as to create higher total concentrations or even more significant human health concerns.

VI pathways should be evaluated through the collection of both indoor air samples and sub-slab or near slab soil gas samples.  The gas samples should be collected by a knowledgeable environmental professional who can identify the validity of the sampling.  Sampling time frames can vary from several minutes to 24 or 48 hours based on the information being collected.

The NJDEP has established a set of Generic Vapor Intrusion Screening Levels pertaining to both soil gas and indoor air.  These levels are used to determine further action ranging from further delineation of the potential source to modifications of the receptor to prevent continued concerns.  The NJDEP further established Rapid Action Levels for indoor air contaminant levels which require immediate action to correct.

Once the data is compared to the NJDEP standards and a VI issue is confirmed, the NJDEP characterizes the issue into either a Vapor Concern (VC) or Immediate Environmental Concern (IEC).  The VC is identified as an indoor air sample which exceeds the NJDEP Indoor Air Screening Level and there is a confirmed vapor intrusion pathway.  A VC does not require the implementation of Interim Response Action or the installation of a vapor mitigation system as part of the Engineered System Response Action.  The current time frames for VC issues area as follows: