Oil Tank Leaks
What to know about leaking oil tanks.

Oil heat became popular when oil became readily available after World War II (Post WWII there was an over supply of steel and oil that was not needed for the war), oil for residential heating has been stored in uncoated (read not rust proof) steel tanks. Like any metal surface that is exposed to moisture and oxygen, rust will form on the metal and corrode (degrade) the tank.  Corrosion of the steel tank will cause oil tanks to leak.  Rust never sleeps and it is commonly understood that a buried oil tank will eventually corrode and leak. 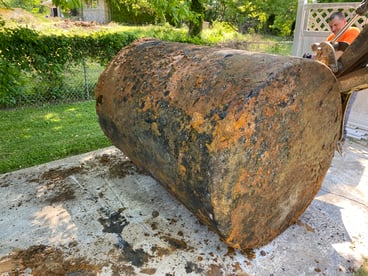 When oil tanks were buried no one thought it was a bad idea.

No one thought about the tanks leaking (hey oil comes from the ground).

No one even really thought about having them removed, "sure just bury the tank under the driveway".

Oil tanks leak on the inside

Acid rain results from the burning of fossil fuels, when sulfur dioxide (SO2) and nitrogen oxides (NOX) are emitted into the atmosphere and transported by wind and air currents. The SO2 and NOX react with water, oxygen and other chemicals to form sulfuric and nitric acids. These then mix with water and other materials before falling to the ground

To reduce Acid Rain the sulfur content in fuel was lowered.  For years  heating oil has been low sulfur.   Oil does not  lubricate a tank from the inside.  The advent of low sulfur fuel allows bacteria to breed in the tanks (sulfur is an antimicrobial) The bacteria can secrete an acidic by product that corrodes the tank from the inside out.   Look at the photo below.  See the rust on the very bottom of the tank where the sludge sits?  See how shiny the rest of the tank is?  This tank is 11 years old, with a 10 year warranty and the rust has already formed. 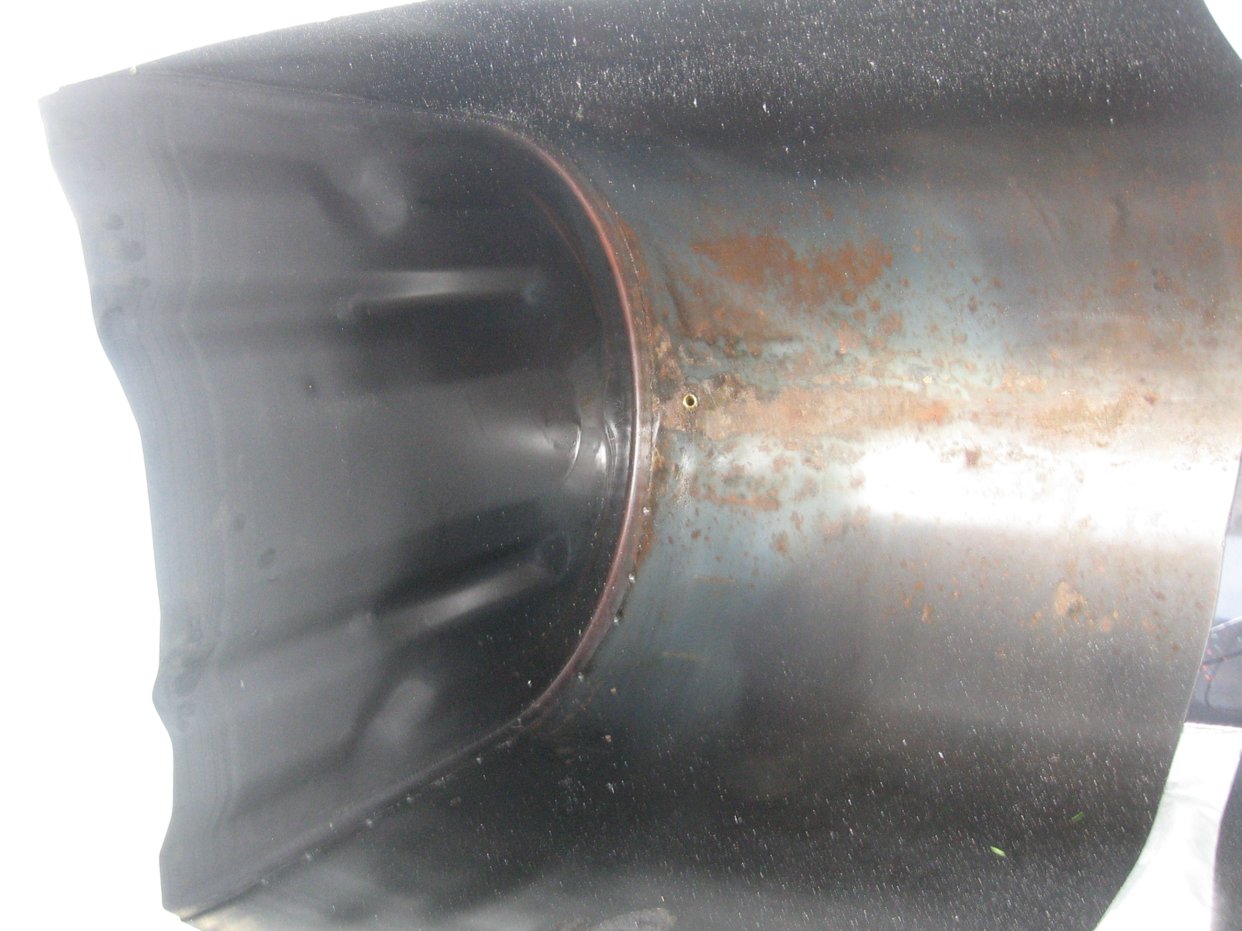 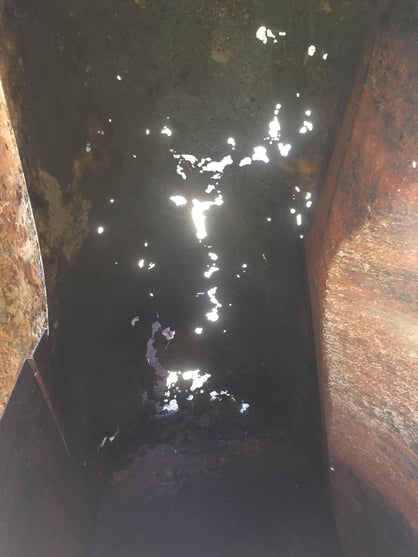 This is the top of an oil tank, after a hole was cut into the tank for cleaning and before the tank was removed.  Although the soil has rust like color you can clearly see the rust on the outside shell of the tank.  These photos show how rust can attack a tank from inside and outside. 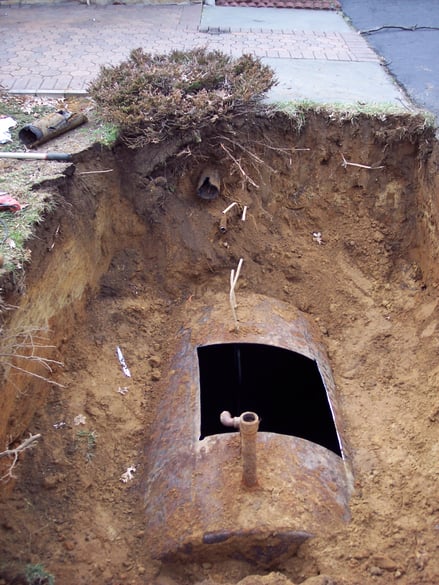 The following photo shows corrosion holes in a piece of an oil tank that was removed.  You can see the different sizes of the holes as compared to common known items, such as coins and a marker.  It was determined that these holes took approximately 8 years to reach the sizes shown.  If you have an older insurance policy you may have insurance coverage for the loss. Curren can Age Date the leak to see when the leak occurred, possibly getting you insurance coverage.  The following link has more information on age dating oil:

Age Dating When a Tank Leaked 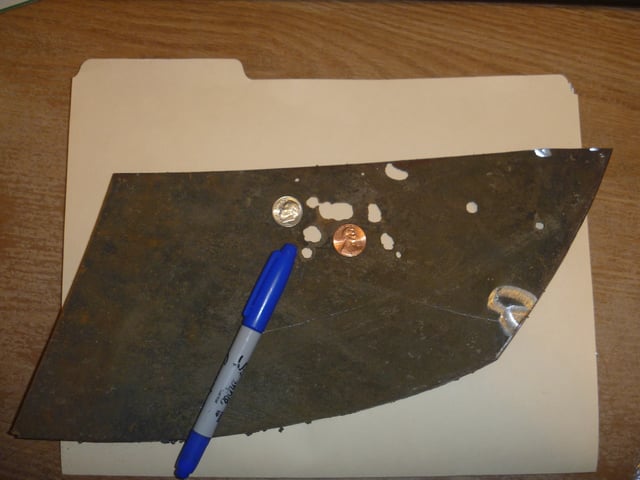 What can I expect to pay to remediate an oil tank leak on a property? or How much does it cost to cleanup an oil tank leak?  The average cost for cleaning up a residential heating oil tank leak can range from $4,500.00 to $15,000.00 dollars.  In most cases, homeowners insurance will NOT pay for the remediation costs.

As a homeowner with an oil tank, you have no doubt heard stories about leaking oil tanks & the impact the cleanup process has on your property.  If you have an oil tank leak, the cleanup process is not always a major project, but is a project you will most likely never face again and you may not have a network of people who have had a leaking oil tank to advise you.   At Curren we are oil tank experts and this web site is meant to help you understand the process oil leaking oil tanks and how to correct them, both quickly and efficiently. 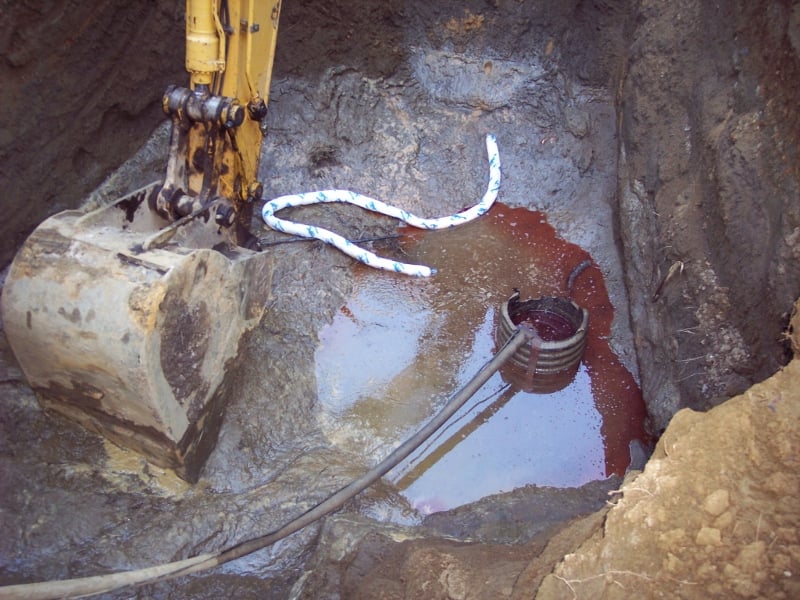 Oil tank leaks refers to the uncontrolled release of oil from an oil storage tank.  Typical residential oil tank sizes range from 275, 290 to 500 or 1000 gallons in capacity.   When an oil tank leaks it normally starts with a pinhole size opening, which allows oil to escape and impact the soils around the tank.  After oil leaks, gravity pulls the oil down deeper, rain can also help push the oil away from the tank driving the oil deeper and also horizontally.    The red you see in the photo is oil.

Above ground Storage Tanks (ASTs) can also leak, but oil leaks from ASTs are typically sudden and obvious. Oil tank leaks from buried tanks can go on for years without evidence to the tank owner.  Rarely is so much oil suddenly lost that the owner suspects there is a problem with the tank, as the leak is typically very gradual, almost like a very slow faucet drip. Again, oil tanks leak because they are used and kept in the ground past their typical lifespan.   A new top of the line tank bought today may have a 10 to 20-year warranty.   As a general rule, which is rarely ever followed, when a roof is replaced so should an oil tank. 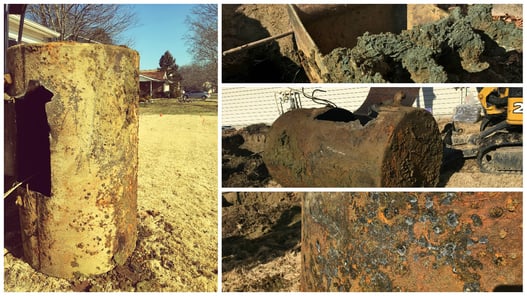 Oil tank leaks can be found by removing an oil tank, or by obtaining soil samples from around the tank. Soil sampling around an oil tank is one of if not the most reliable way to evaluate an oil tank for leaks. A key point that people overlook, if any oil is found at the burial depth of a tank, the tank is leaking. Kind of like pregnant, not pregnant.

How do you address an oil tank leak?  Oil tank cleanup is a multiple step process that should not be rushed into.  If you are asked to go from tank removal to remediation, you should question both the expertise and integrity of the firm that removed your oil tank.

Remove the tank or perform soil sampling to verify that oil tank is leaking or not.  This should be performed by a licensed environmental company, not an HVAC or backhoe company.

Your environmental company should be able to interpret the soil sample data to determine if the oil levels in the soil are actionable, meaning requiring remediation.   There are permissible levels of oil that can remain in the ground.  If you want to know more about oil levels in soil click the following link: /my-removed-oil-tank-leaked

Step 3. Define the extent of the oil leak

Assuming your levels as verified by independent laboratory analysis are above permissible limits, then your next step is to do additional testing to determine how deep the oil has migrated.  Please note that the testing completed in step 2 involves obtaining soil samples below where the tank was buried (tank invert). 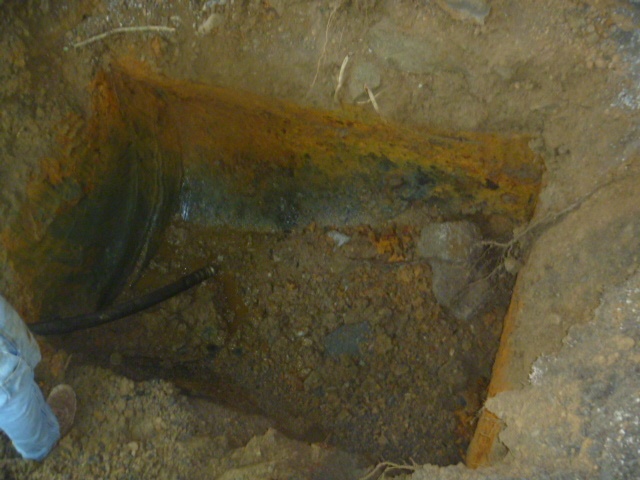 This is ground zero so to speak or the expected highest oil containing soils as these are the soils that were in direct contact with the tank. If these soils are with standards, remediation is not required.  Conversely if the levels are above standard, then you know that soils right below the tank require remediation.  What you do not know is how deep the oil has migrated or how far the oil has migrated to the North, South, East or West.  This is why both a horizontal and a vertical evaluation of the oil tank leak are needed.  Determining if the oil leaked into the water table is also an important part of this step because if the water table is impacted, homeowners insurance may cover the cost to remediate the tank.    If the water table is involved in the cleanup, the homeowner will be instructed to contact their insurance company.  At this point, the burden falls on the insurance company to verify the policy covers this event.     This usually means an adjuster is sent to examine the property and review the consultant’s findings.

Where step three is meant to diagnose how large an area is contaminated with oil, this step arms you with the knowledge to collect competitive prices on the cost to remediate.

Step 5. Closure of the Oil Tank Leak at the State Level

After the oil tank leak is cleaned up, as verified by independent laboratory testing, the environmental consultant will file state paperwork and obtain a no further action letter (NFA).  This NFA closes out the oil tank leak at the state level and is you very valuable document to keep to prove you are in compliance with the environmental regulations.

Having an oil tank leak can be frustrating, expensive and confusing.

Expert advice comes from experience, call the experts at Curren Environmental, we have over 20 years experience with oil tank leaks and offer a free initial consultation.  Professional help is available Monday to Friday 8:00 am to 5:30 pm EST toll free at 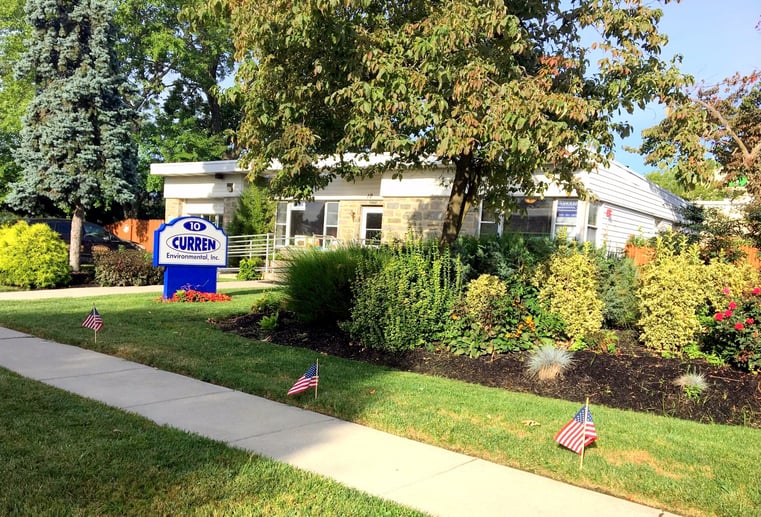