Why does my filled in place tank have to be removed?

Why my filled in place tank has to be removed?

Case in point, the above photo is a tank that was filled with foam.  You will notice that there are no access holes cut into the tank that would have allowed tank entry.  Yes you can see the large horizontal access hole Curren cut into the tank, but  no such hole was there before, which means the tank was never cleaned of residual oil.  See the oil in the tank and on the foam?

You can see that to clean a tank you need elbow grease to go inside the tank, any oil left in a tank can leak in the future, hence why closed in place are removed. 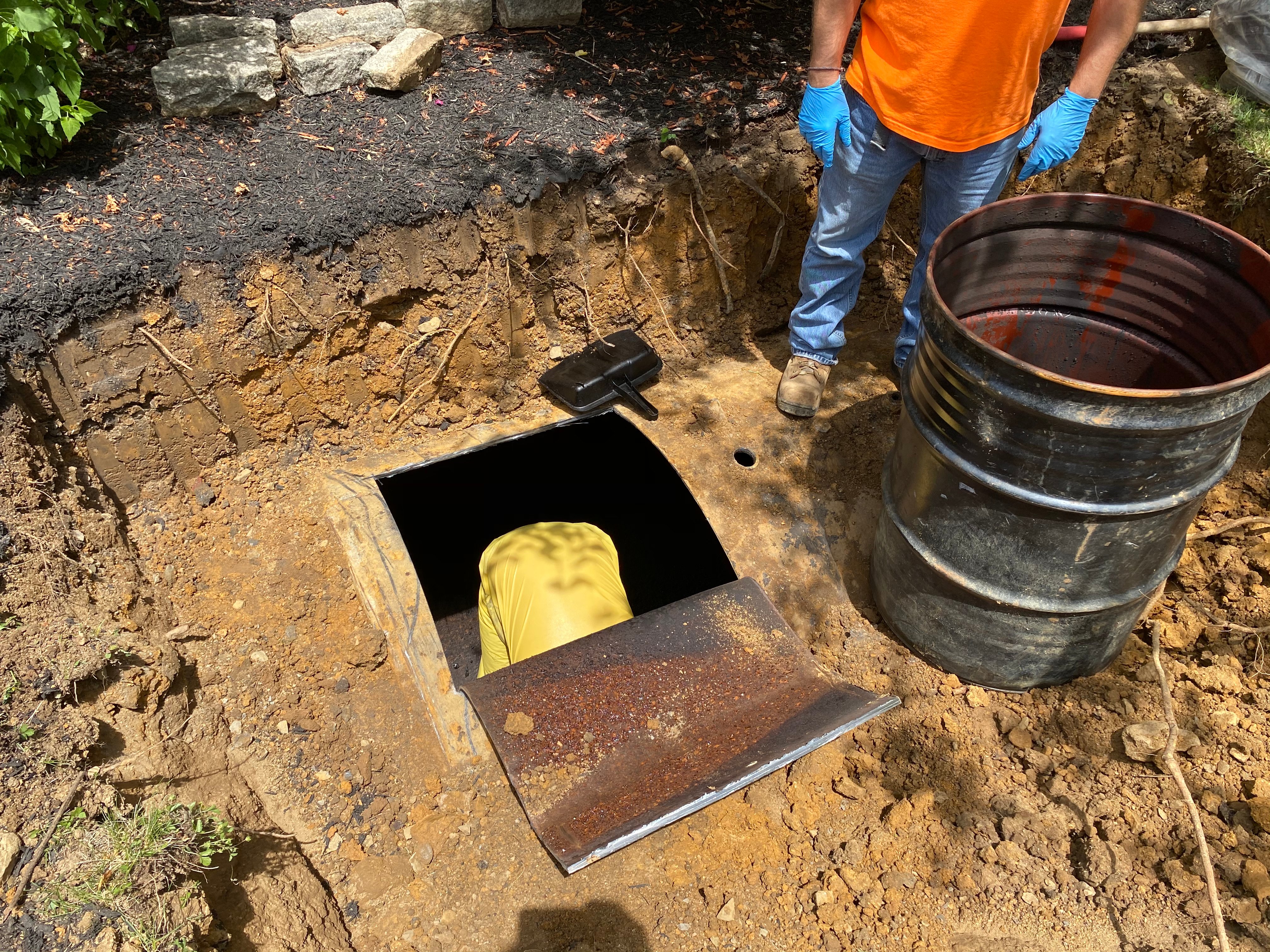 Remember when people thought smoking was healthy?   There was a time when people and the tobacco industry didn’t openly speak of cigarettes as being unhealthy or addictive. This correlates to tanks that were previously filled in place without a “non-leaking certification”.   Few people want to find a problem, meaning their tank leaked, since problems have to be solved and that can cost money.   Oil tanks rust from the inside and out, and the cleanup of these leaks can cost thousands if not tens of thousands of dollars.

This tank was filled with sand, to absorb the oil in the tank, rain water filled the tank pushing the oil up and out into the soils.  $29,000 later the tank was removed and the soil remediated. 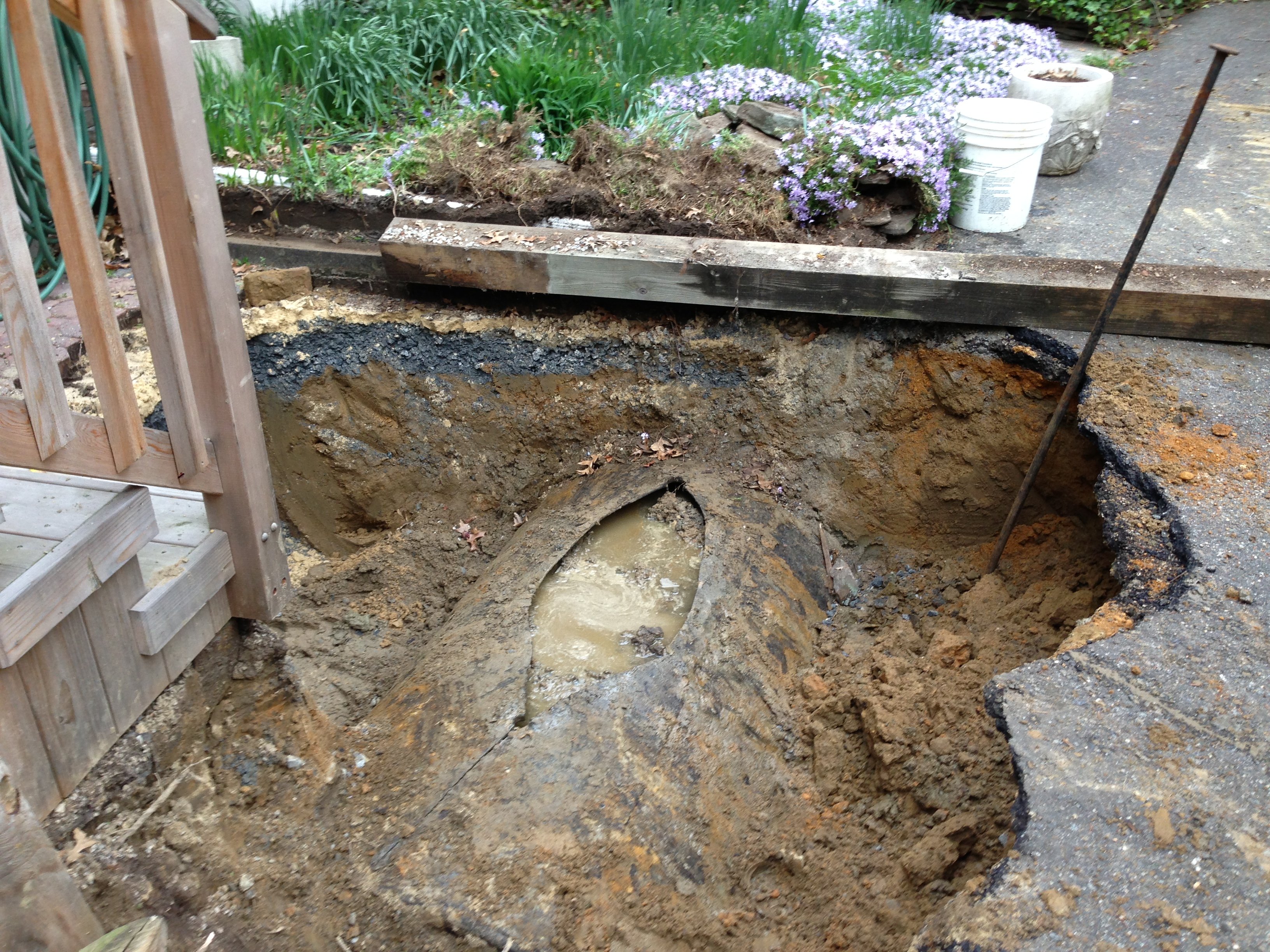 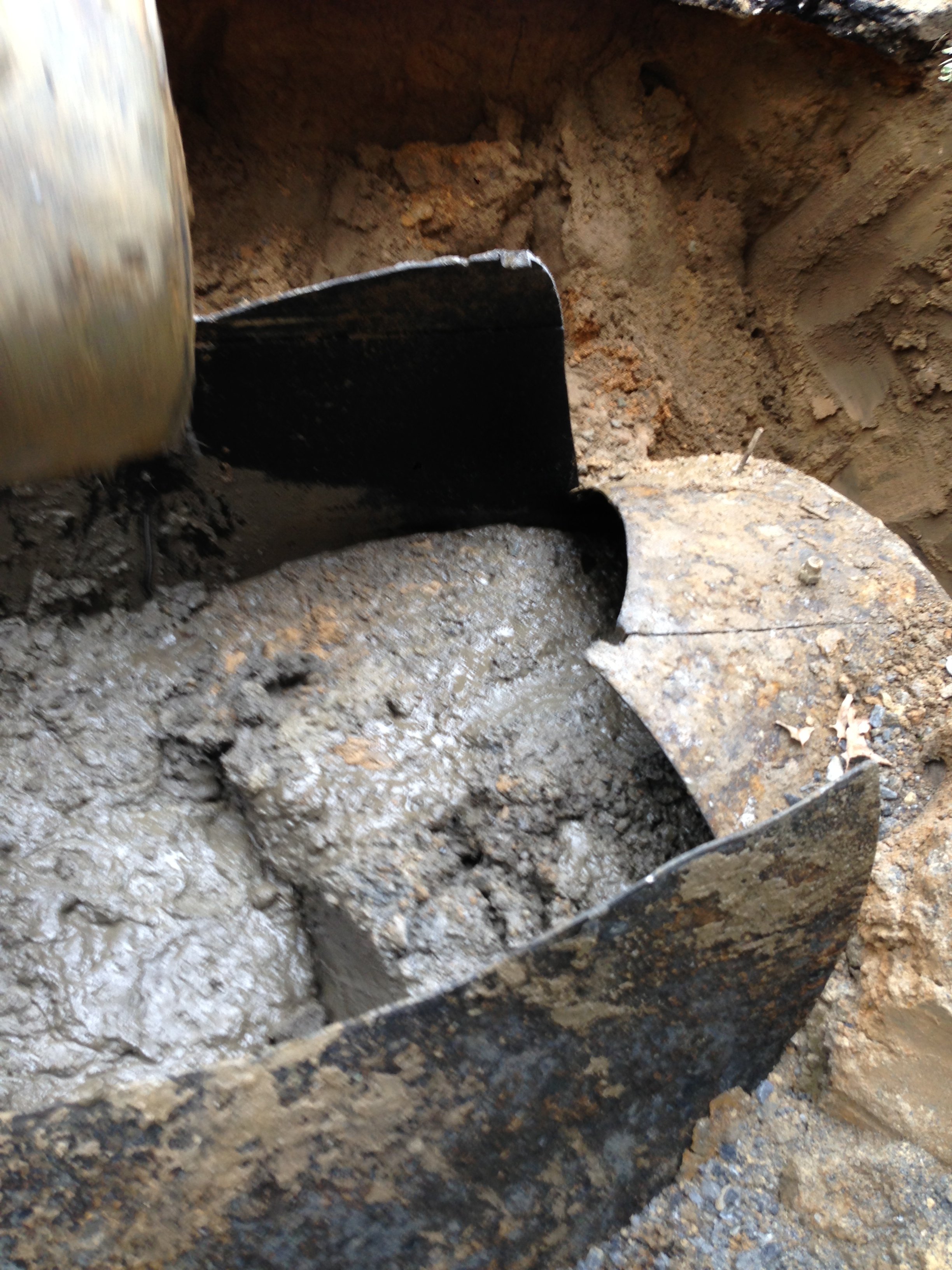 Many property owners either being naïve or savvy had their buried tanks filled in place years ago.  Believing or hoping that if they hired a company to fill their tank (not a DIY project) and getting a local permit in conjunction with township/municipal inspection the tank would never be an issue. Fast forward to today, same property is being sold and its owned by either the same people who filled the tank in place or a subsequent homeowner (who typically naively bought the property not understanding the tank liability) and now the buyer wants the tank removed and tested.

These are all reasons why today's buyers want oil tanks removed and tested, to prevent the tank from being an issue in the future.

Statements from property owners calling our office about their tank over the past 25 years.

A little history, in the 1990’s Federal regulations were established regarding commercial tanks (gas, diesel, kerosene, aviation fuel) and there were clauses where a commercial tank could not economically be removed that the tank could be filled in place, AFTER holes were created in the bottom of the tank allowing soil sampling for leaks to be obtained. 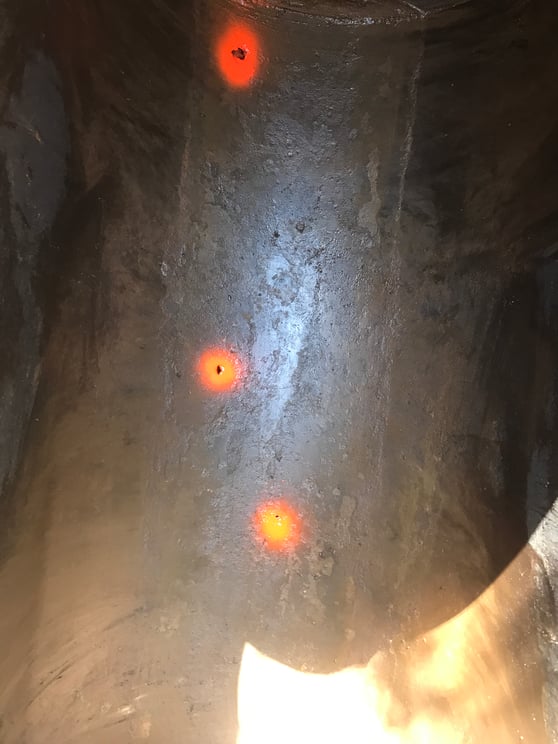 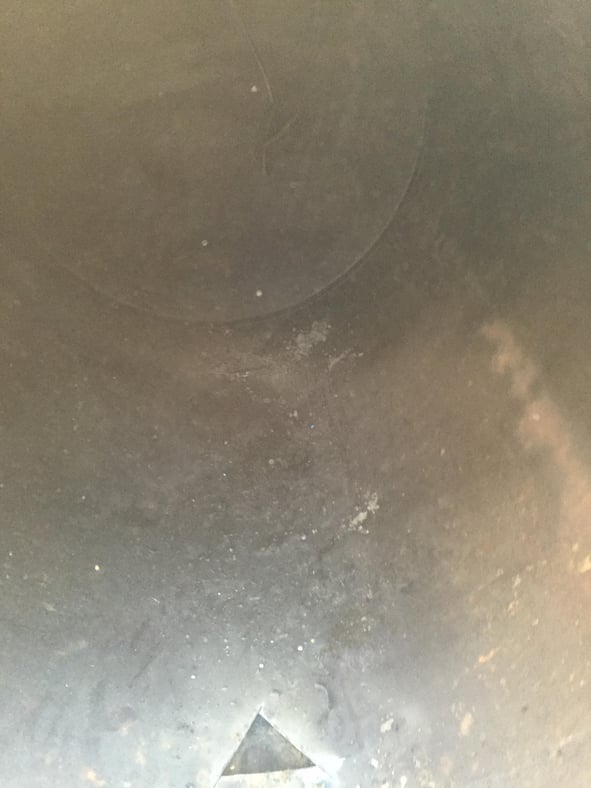 These regulations created a tank removal/closure industry and established standards for tank removal and closure in place, these standards said evaluate for leaks, do testing, document (draft a report of the work), report leaks to appropriate government environmental agencies.   So companies doing  tank closure had a Standard Operating Procedure (SOP). 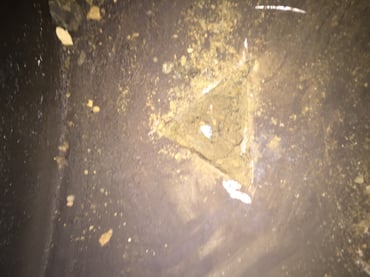 These photos show coupons (holes) cut into bottom of tank for soil sampling.

Now these testing regulations didn’t apply to residential oil tanks, but there was an awareness that if a leak was discovered it was reportable and cleanup maybe necessary.  So property owners circumvented the proper course of action and instead of removing a tank, and potentially finding holes in the tank or smelling oil impacted soil, they chose the route of tank abandonment in place. While I can comment on every company doing tank work, but I am sure many recommended sampling due to future real estate transactions, but in the end, the companies get paid for doing tank work with or without sampling so you have thousands of tanks that were filled in place without testing that now have to be dealt with in a real estate transactions. 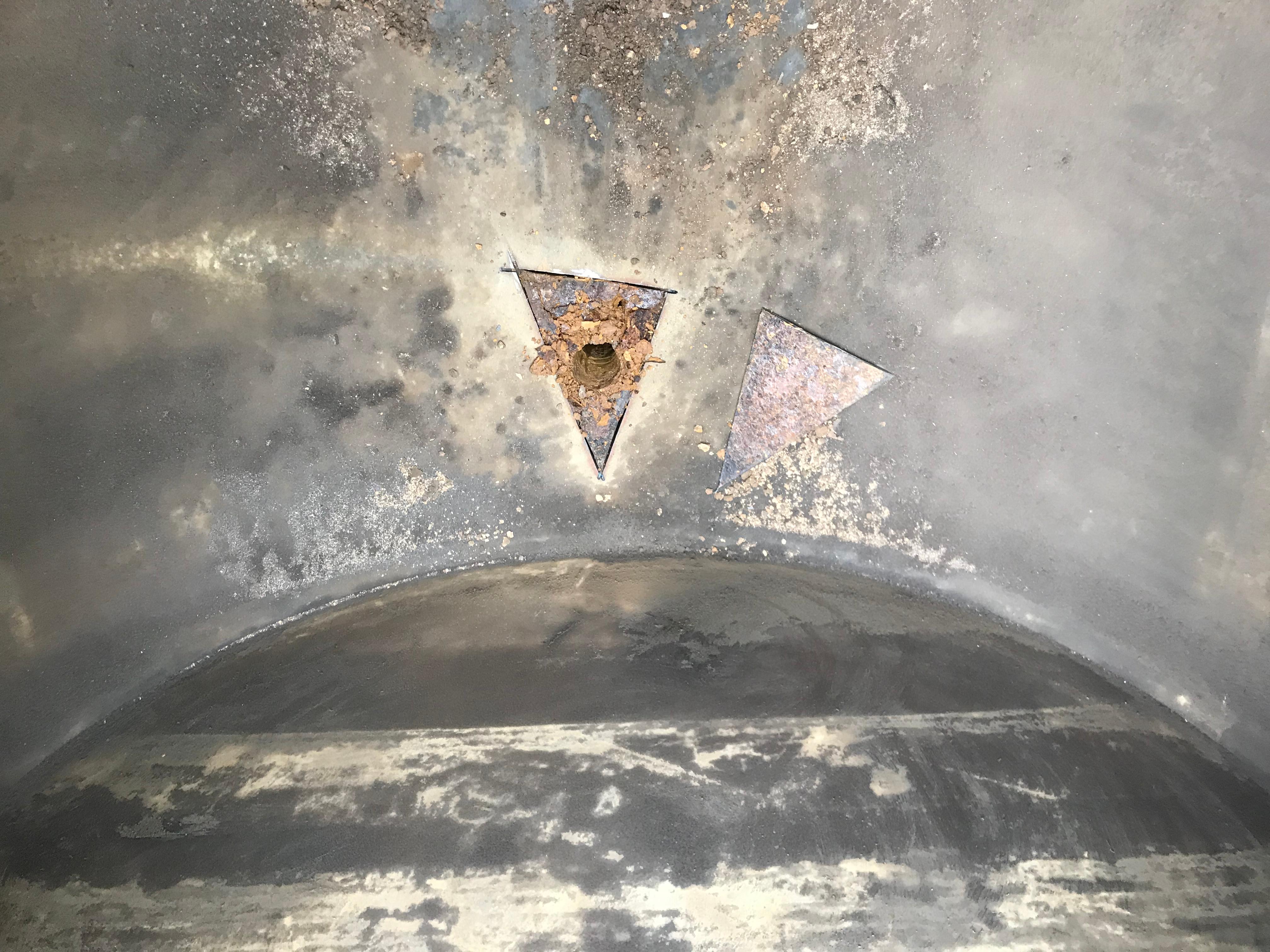 We can personally  attest that Curren has always suggested soil sampling for tank removal or closure in place, some people deferred this testing.  About 17 years ago we made it policy, Curren won’t work on your tank if you don’t complete sampling.   We took this stance so property owners didn’t get stuck in a future sale and so people didn’t stick another person with a leaking tank. Unfortunately this was not followed by other companies.

Some 40% of tanks we have removed were tanks previously filled in place, so believe me if you have a property with a tank that was filled in place without testing, you will get it removed if you want to sell the property.

No you can't climb inside a tank when filling it in place and see pin holes.  Ever get a flat tire?   Did you see the hole?   See the photo below?  This tank was removed, do you see any holes in the tank?

Well there were a few holes that were apparent after the dirt was scrapped off the tank.  If this tank was filled in place and remained in the ground, there holes would not have been apparent if the tank was not removed.

Many people like to present the local permit obtained for abandoning the tank.    People somehow think the approval from the town means the tank didn't leak.  Please note that no your local permit which the town approved for filling the tank in place doesn’t certify the tank didn’t leak!  It certifies you filled a tank in place with or without testing (which while legal, makes it harder to sell, ahem near impossible to sell)  mortgage companies, insurance companies and attorneys for buyers will have a hand in preventing the sale with an inground tanks.  Too much liability, unknown cleanup expense is what causes the hesitation.  No one knows if the potential tank cleanup is $10,000.00 or $120,000.00? 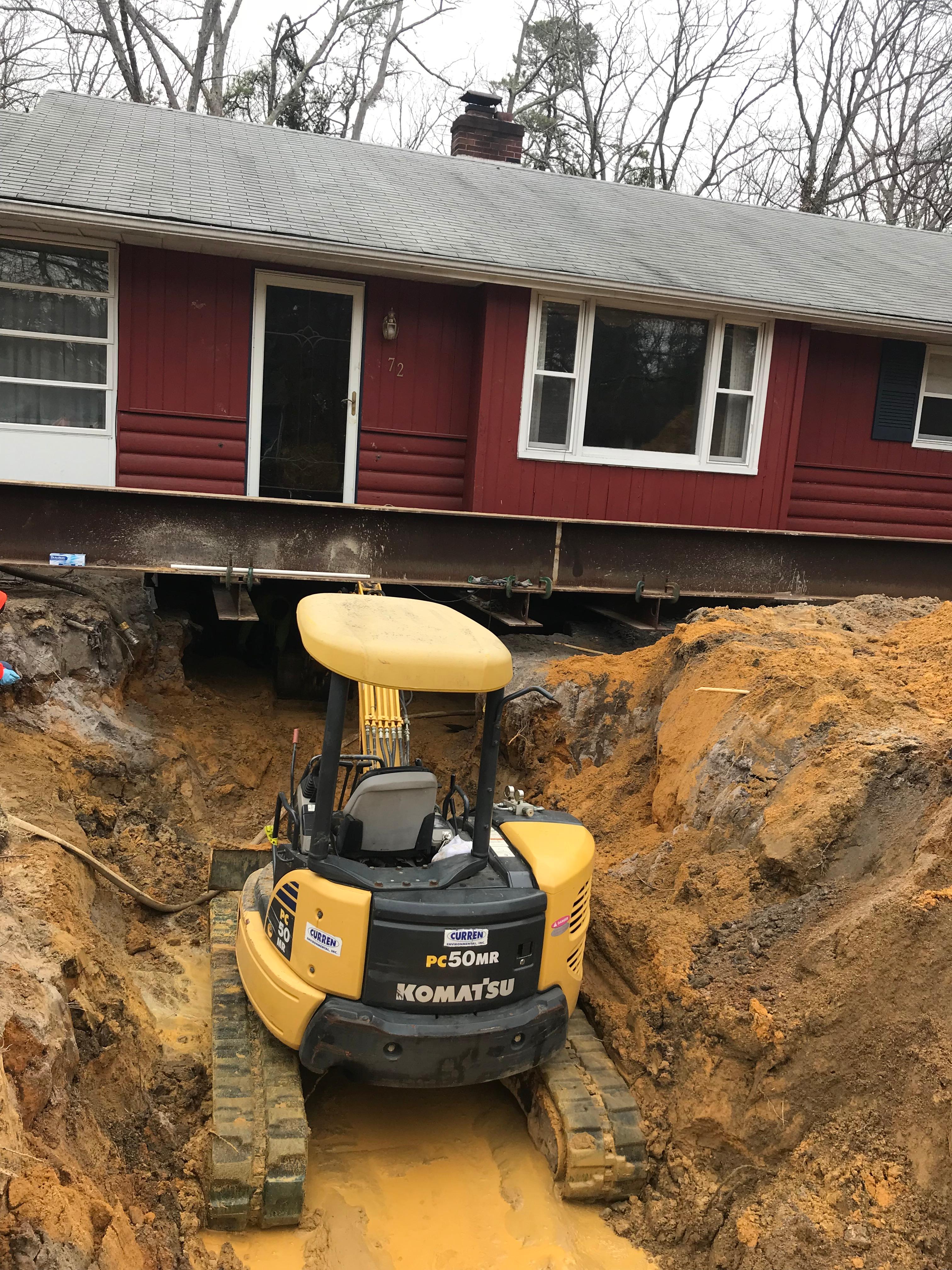 If you own a house with an abandoned untested oil tank, expect to either have the tank removed, or the prior work to be reverse engineered, meaning all the material in the tank removed, holes cut in bottom of tank and soil ampler obtained, then the tank back filled again.  We just did this for a tank filled with foam under an addition, so yes it happens.   Buyers will want the know if the tank leaked, trust me if you were buying a property with an abandoned tank you would want to know the same thing.

Have a tank question?  Call the experts