Do oil tanks exist under buildings?

It is not unheard of that buildings are built on top of oil tanks.  Definitely not a good idea, but the structure was typically built either before environmental regulations or without regard for the regulations, or the oil tank.

Every oil tank that is underground and even under a building has the possibility of leaking.  When a tank leaks you may have to clean up the leak, which requires removing soils (soil remediation).  How do you do soil remediation when you have a structure over the tank?    The photo below is a garage, where the walls were supported and the floor and contaminated soil was removed.

If you want to buy a house with a tank under the house or think of selling a house with a tank in this situation, think again.  The concern with oil tanks is they leak and if they leak you may have to clean them up and that can cost money.  I know a number of properties that owners tried to sell, but having a tank buried under the sunroom was a sticking point and prevented a sale.  The only way these houses went to the settlement table was by having the owner cut open and clean the tank and take samples to show the tank did not leak.  Yes, a project like this can cost thousands of dollars but these are costs that are the responsibility of the property owner even if they never used the tank and bought the house knowing a tank was under a structure.

In practice, many tanks that are under a garage, house or porch we find are not leaking. Why?  Well because you have an umbrella over the tank being the structure.  The house keeps the tank dry which in turn inhibits rust.  Don't get me wrong some do leak, but the drier any metal is the more corrosion resistance will occur.

When decommissioning the tank a confirmation that the tank did not leak can be acquired by soil sampling.  This entails entering and cleaning the tank of all residual petroleum compounds (liquid and sludge).  The empty cleaned tank can then be removed and soil samples acquired from the tank excavation.    But in the case of a tank under a building where removal is not practical, you can cut holes through the shell of the cleaned tank and obtain soil samples.

So you see there is no reason you can't take soil samples from tanks that have been filled in place.  People who own tanks do not want to take soil samples because they may get bad results.  The saying goes if you do not test you have a 100% chance of finding nothing. 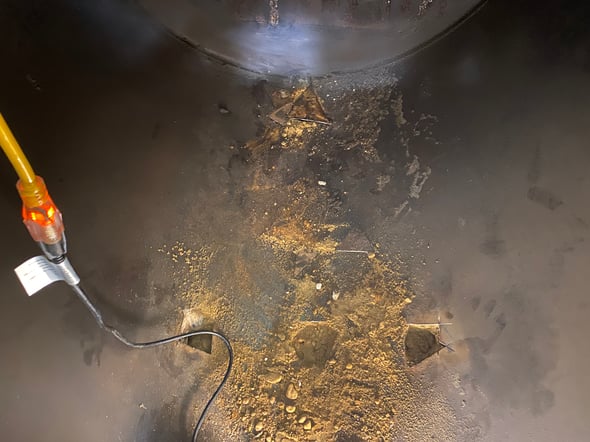 The photo series below is of a tank under the crawl space floor that was cleaned and tested.  The rub was that the tank leaked and remediation was necessary.  So contaminated soil had to be removed.

The tank was removed, and the soil contamination removed.  A picture is worth a thousand words. 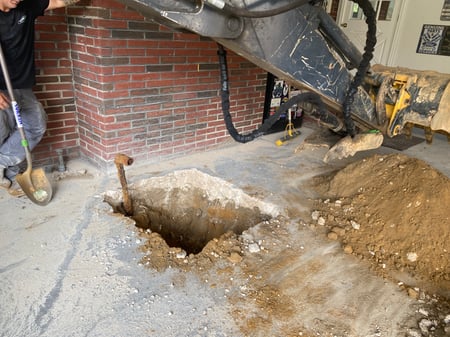 END_OF_DOCUMENT_TOKEN_TO_BE_REPLACED

How do you know if your tank is leaking?

So many people continue to use Underground Storage Tanks (USTS), with the belief that the tank is in 100% working order, meaning no leaks.    How do you know if your tank is leaking -   Ninety-nine percent of the time you have no idea if your underground oil tank is leaking.   Let's be real, your smoke detector chirps when the battery is low, does your oil tank have an alarm or notification system?

Case in point, the following photos show a tank that is in use and was being replaced with an Aboveground Storage Tank (AST) for a future real estate transaction.  The photo below shows the tank fill pipe poking out of the ground about 18" high and in front of the rear stairs, pretty obvious a tank is present.

This tank gets removed, and we find that the tank was filled with oil, this oil was going to get transferred to the new AST. 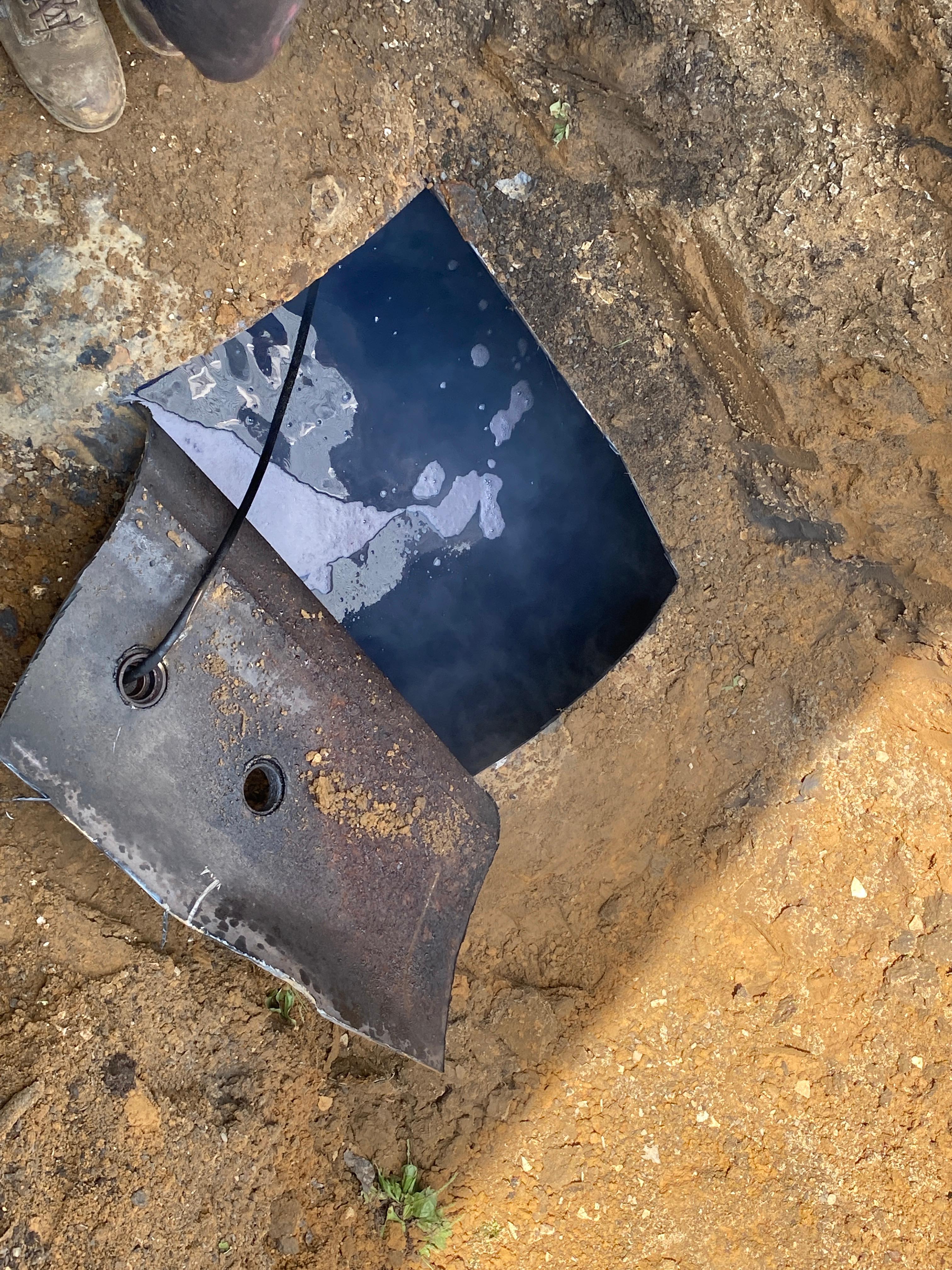 So again, tank was being removed proactively, no signs the tank was leaking.  Tank gets removed, soils are a course sand. 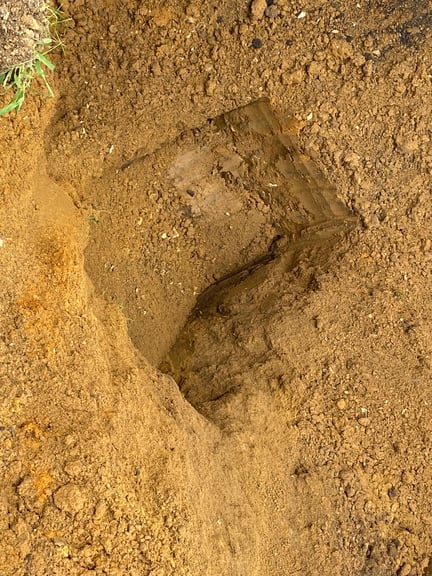 So if you were on site and wiped you hand across the wetness, it would feel slick and smell oily.  Almost dead center of the photo below you can see the corrosion hole in the tank, almost big enough to put your finger through.  Now this hole was not always so large, it started as a pin hole, working through the tank as corrosion removed layer after layer of steel.  Once the hole advances through the tank shell, oil drips out, saturating soils, causing the soil to bind to the tank and form a plug that slows the oil leak, but does not stop it. 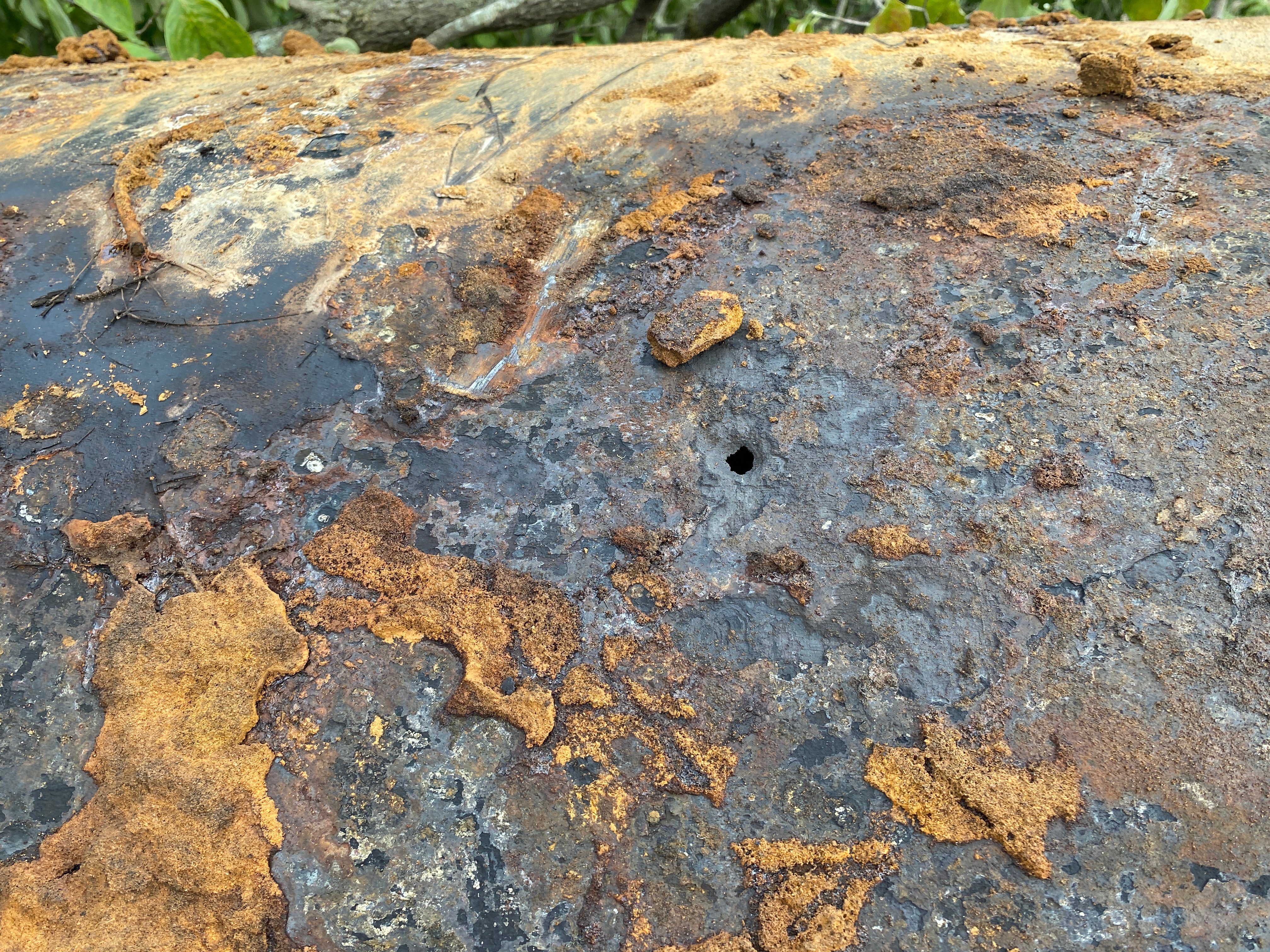 This tank, which was holding most of the oil, was slowly dripping oil for years.  The owner had no idea, because the hole was at the bottom of the tank, so water would not enter the tank and shut off the heater, the oil loss were drips, not dozens of gallons a day.  If you lost 70 or 10 gallons, you would notice, ounces a day, goes unnoticed.  Don't believe me?  Answer these questions.

Not trying to be funny, just making a point, that you don't pay attention to the mundane.   When your computer hard drive crashes, its a catastrophe,   well the same goes for your oil tank.  Rust never sleeps and the majority of tanks are well out of warranty and even farther out of the engineered design life expectancy.

Tanks are out of sight out of mind and people think they have a handle on the tank being in good condition, they think oil usage is normal no water in the tank are all signs the tank is not leaking.  Well water enters only of there is a hole in the top of the tank that would allow water to drain into, oil usage you only notice sudden drops in liquid, which is not the norm for a tank leak.  To be fair commercial tanks have expensive electronic leak detection systems, residential tanks do not.  To think you have a grip on how much oil your using, it giving yourself a little too much credit.

Some advice for knowing if your tank is at risk of leaking.

A no to any of these questions means you should replace the tank.  You can install a new Aboveground Tank that has a 30 or 40 year warranty, yes they cost money, but less than having to remediate a tank leak.  Tank leaks cost tens of thousands of dollars.