Buying a House with an abandoned oil tank.

The real hurdle regarding a property with an abandoned oil tank is that the owner does not want to do anything with the oil tank.    People will say the tank is fine, that they, themselves, purchased the house with the abandoned tank so its fine for those homeowners because they don't have the monies to remove the tank.

So what is the underlying issue? The homeowner doesn't want to find that the tank is leaking.  It's costly to remediate, and they can easily pass that along to buyers who don't do their due diligence.    In some cases, buyers are tempted to take a credit for tank removal to allow the sale to go through.

I cannot advise having the work performed after settlement as you do not have enough data to determine what would be a prudent amount of money to set aside in escrow in the event that the oil tank leaks. For your reference, a small oil leak can cost $5,000.00 to $10,000.00, with larger oil leaks costing tens of thousands of dollars. In the absence of a written narrative (report) from the tank closure company and associated laboratory analysis that would have been performed during the closure activities, you cannot say that the tank does not represent an environmental issue.

Oil tanks represent an unknown financial liability that can affect the value of a home, the ability to obtain a mortgage and homeowners insurance. Since the abandoned oil tank is the hurdle to overcome in a real estate transaction, removing the oil tank is the logical course of action.

Tank is abandoned, stopped using it and left it "as is".  Think of it as an abandoned car. 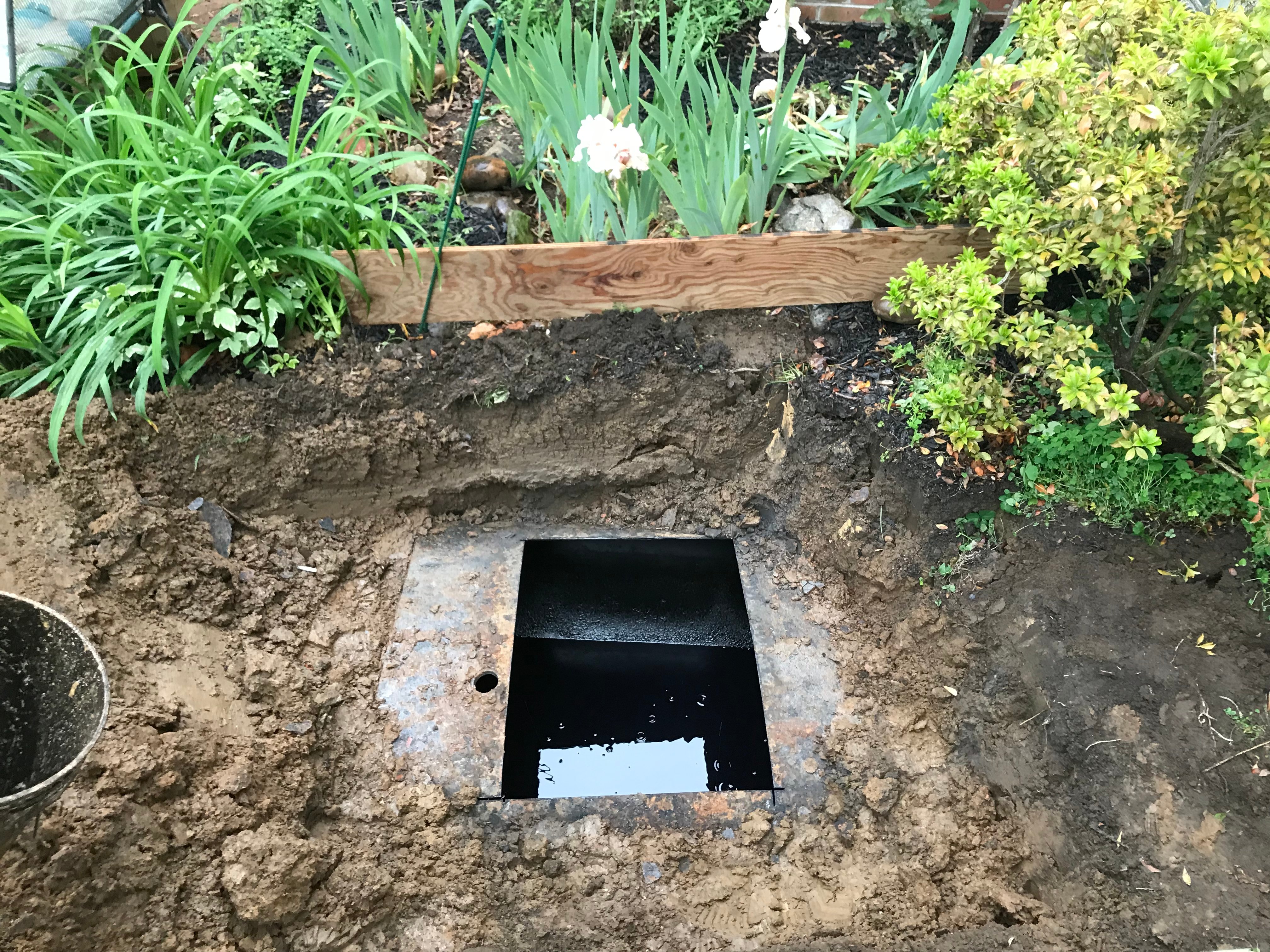 This oil tank was abandoned 11 years ago when they switched to natural gas.  About 75 gallons of oil was left in the tank or should I say abandoned.

Oil tanks abandoned in place means something was done to the tank, like filling the tank with sand, stone, concrete or foam.  The question is was the tank cleaned and sampled?   A report would help secure this situation and address concerns of a tank leak.  This situation commonly has no documentation regarding the tank leak, the reason being is the owner didn't want to find  a problem, so no test, no problem can be found.  This is legal, but leaves the unanswered question regarding a tank leak to be answered when the property is sold.

Abandoned oil tank, no paperwork, current owner bought it with the abandoned oil tank.  Tank was abandoned from a prior owner and there were promises that it was done properly but you have no written documentation. 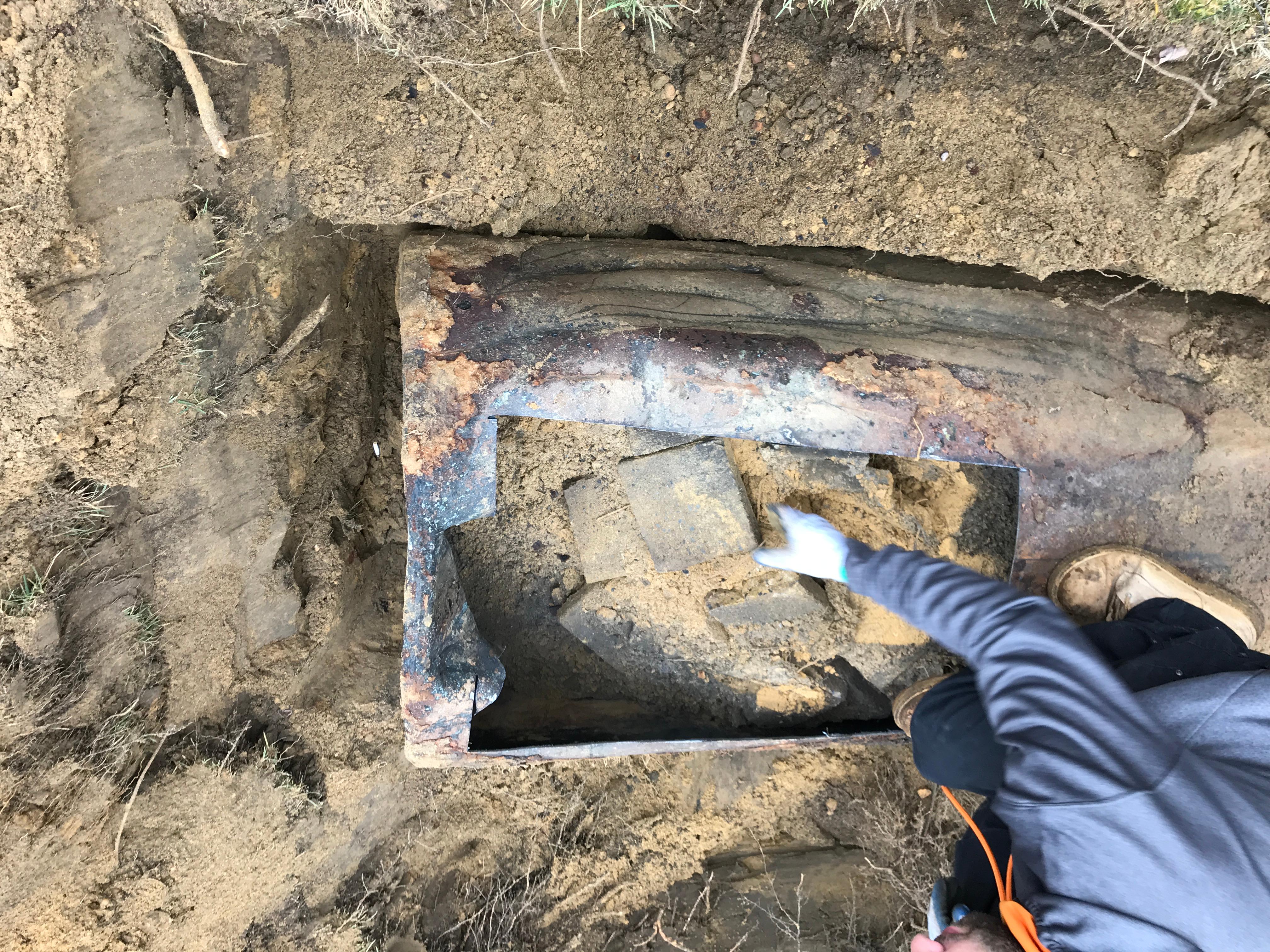 This tank was abandoned in place, we removed sand, slate pavers, bricks and beneath all that was oil.

Tanks abandoned in place and the work was done by the homeowner with some friends. No permits, but a really good story about what hard work it was to do.  Yes - this does happen and 99% of the time the DIY tank abandonment is not performed as well as it could have been performed.   Think about it if you have never done something before how good are on your first attempt? This tank was foam filled, but the tank was never entered and cleaned.  So oil remained in the tank.   You can see how the foam is discolored from the oil.

Tank abandoned in place, but the tank was actually best served to be filled in place due to obstructions.  Meaning there are tanks by pools, under decks, under garages, basically in a location where it would be excessively expensive, even dangerous to remove so the tank gets abandoned in place.  This is common on commercial tanks as commercial tanks are larger and longer and removal causes a larger footprint of disturbance.  In this circumstance after the tank is cleaned samples are acquired and a report documents that yes a steel object remains on the site, but it is technically no longer a tank as it can't hold  liquid (there is a big hole cut into the top of the tank).   This is what we do to document commercial tanks that are abandoned in place, you should expect the same for any residential tank.   Why an abandoned tank may not have a report is either the owner not wanting to test and find a problem, cost, owner went with the cheapest company (cheap means something is lacking) or simply the company that did the work doesn't test, or isn't licensed for testing.

25 plus years of oil tank work, Curren Environmental can confidently say 99% of oil tanks can be removed.  So many abandoned tanks should have been removed but were not.   Don't buy a property with an abandoned tank that you are  not 100% certain it did not leak.

END_OF_DOCUMENT_TOKEN_TO_BE_REPLACED

As of May 2011, New Jersey's leaking tank grant and non leaking tank grant are not processing new applications.   What this means for anyone who has yet to submit a grant application is that your chances of receiving funding are less than if you had submitted before May 2011.  The sheer popularity of the grant program inundated the NJDEP with applications and depleted the EDA of funds.   Couple this with a lack of cash infusions by New Jersey (funds come from the corporate tax) and it is easy to see why the well is running dry.  No one can argue that the tank grant program has not helped homeowners remove and remediate tank leaks.   The fundamental idea behind the grant was to encourage homeowners to remove buried steel tank, before they leak and to assist homeowners with remediating tanks that did leak.  There is no question that a buried steel oil tank will leak at some point, be it next week, next year or 20 years from now, rust never sleeps.  So all the tanks that were removed that did not leak saved thousand of dollars in future remediation costs.

If your tank leaked, your next step is to delineate the extent of the contamination so a cost can be developed to remediate the oil contamination.  These costs can then be applied to a leaking tank grant, which New Jersey is still accepting (applications are date stamped and will be processed when monies are available).   If you find that the cost to address the tank leak is within your budget, you can hire a certified (UHOT) company to do the work and submit to the grant (when monies are available) for reimbursement.